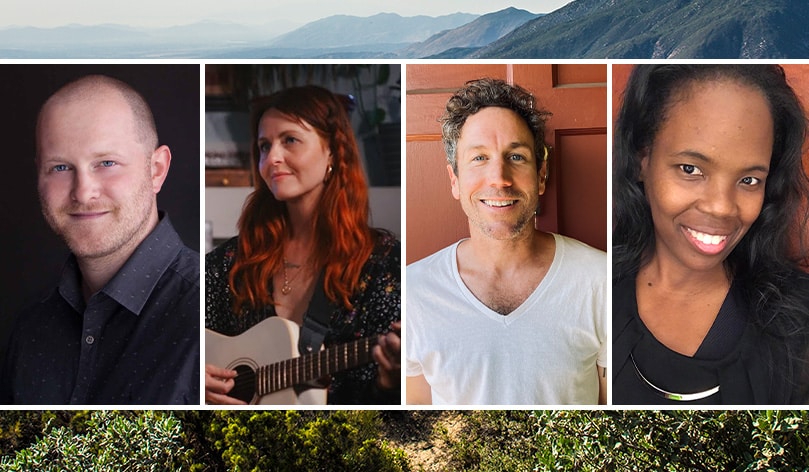 Violist Kai Potts Smith has joined Idyllwild Arts as the new Music Chair, coming to us from the Maryland/DC area. Her daughter Maya and Maya’s father Aidan aren’t far behind with their two rescue dogs. Transitioning to her new role in Idyllwild hasn’t been too much of a culture shock for the Los Angeles and Las Vegas native, who studied at USC after Cincinnati College Conservatory of Music. “California is my heart home,” she says.

Kai first came up our mountain in 2010 as an Academy orchestra ‘ringer,’ and, fortunately for us, has since accepted every invitation to come back. A professional musician from the age of 15, Kai has played with countless orchestras in the USA and overseas, played on hundreds of movie/TV/recording studio projects, was Principal Viola for Santa Barbara Symphony and the Hollywood Bowl, and played with Celine Dion for six years.  Fascinatingly, Kai is also a vibrational sound healer and yoga teacher who loves Harry Potter and throwing dinner parties. Her far-reaching talents will be evident during the Music Department Showcase performance coming up on Sunday, October 23 at 2:00pm in William M. Lowman Concert Hall, which will provide the opportunity for some of the music department’s brightest young artists to shine! The Showcase will feature students from across all of the music department’s programs, from classical and jazz to songwriting, and finish with a command performance from one of our competition winners, Rentso Stavrev.

As Music Chair, Kai aims to bring the community together with a goal of finding simplicity and encouraging each student’s unique interpretations of their art form. “I hope to inspire everyone here to really connect to the larger arts scene, and even be on the cutting edge of contemporary performance. Tradition lives through the lens of what is possible in the now.”

Kai will not be alone in this quest within her department; she will be supported in her mission by our new Director of Orchestras, Daniel ‘Dan’ Bassin. “Collective creation is a wellspring of joy,” says Dan, whose duties also include serving as a Dorm Parent. Accordingly, he plans to cultivate this healthy cultural and creative “wellspring of joy” both on and off the podium. Dan is certain that interacting with students outside of the orchestra and the music department “will inform all of my other work here.”

Like Kai, Dan embraced music early in life. A noted trumpet player and composer, Dan played his first professional trumpet gig at age 12. This was the same year he started assisting his father, a Chef, in food prep and catering, a line of work he used to support himself throughout college. Dan has his PhD in Composition from The University of Buffalo, NY, and before that spent five years conducting Youth Orchestras, touring over 35 countries. Dan describes himself as “Trumpet player, composer, conductor, improviser, and music educator.” He also strives to be a champion of diversity; Dan’s first IAA Orchestra Concert, to be held on October 22nd at 7:30pm in William M. Lowman Concert Hall, will feature the first performance in Southern California of the 1932 orchestral tone poem Ethiopia’s Shadow in America by Florence Price, an underappreciated African American classical composer. In the 2017 Buffalo Festival of Women in Music, Dan conducted Price’s 3rd Symphony—the work’s New York premiere, after 77 years!

Also joining the Music Department as new songwriting faculty are husband and wife musicians Josh Hogan and Katie Earl, both from the band The Mowgli’s. After a very successful stint as Idyllwild Arts Summer Program faculty this past summer, Josh and Katie agreed to stay on and will bring their perspectives as popular and experienced working musicians to benefit our Academy students. Their own unique incorporation of “Cultivating Connection, Community, and Joy” in their teaching styles will be on display during the first student Songwriting Concert of the year on Thursday, October 20 at 7:30pm in Stephens Recital Hall. “We had ten years to learn our craft, now we have somewhere to invest it,” they affirm. “Touring taught us about teenagers. We connect to them. Let’s find the artist in each student. You will be unique if you can be authentic. Young people are so eager.”

We too are eager—eager to get to know our amazing new music faculty here at Idyllwild Arts Academy, eager to see and hear their work, and eager for everyone in our community to experience their musical cultivation of connection, community, and joy in our classrooms and concert halls.