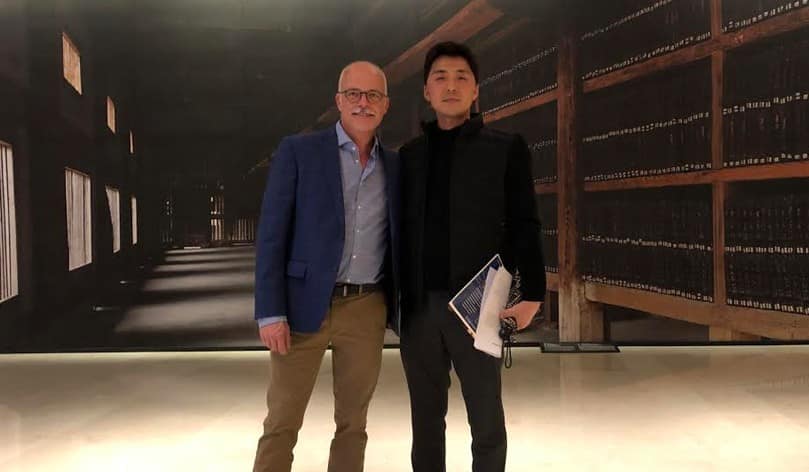 Idyllwild Arts Foundation President Pamela Jordan’s plan to “further uplift talented students while giving those participating in the Summer Program a taste of life at the regular Academy” is powerfully advanced by the hiring of world-renowned flutist, recording artist, chamber musician, and conductor Ransom Wilson as year-round Director of Orchestral Programs.

Wilson is joined by the new Associate Director of Orchestral Programs, Greg Robbins. But the new talent will succeed only by building on the foundation of superb musicianship already established by veteran faculty members like classical piano instructors Dr. Jeanette Louise Yaryan, who is the Music Department’s new Chair, and Dr. Douglas Ashcraft.

Last month, Doug made a special contribution to furthering President Jordan’s plan by visiting three cities in China—Shanghai, Chengdu, and Qingdao—as well as Taiwan and Korea. He went in order to scout young musicians.

Doug admits that the trip was exhausting.

“I was able to spend only one day in a couple of the cities, and then it was back to the airport. And it wasn’t just listening to a young person play for ten minutes, then another one comes through the revolving door. I would spend an hour with each family, talking about Idyllwild Arts.”

Talking to families usually required a translator. Yet Doug managed even with the couple of Chinese families who hadn’t brought translators. In those cases, music helped make the connection.

“The Chinese take their musical education very seriously and the young people have a highly developed work ethic,” he points out. “Learning a classical instrument is more the thing to do there than in the U.S., and the parents see to it that their children take lessons.”

A Piano for Everyone

He heard outstanding young musicians wherever he went, but the experience was not uniform from country to country.

“It was only in Taiwan that every young musician I listened to, no matter what the primary instrument was, also played piano.”

He notes that the Idyllwild Arts Academy Orchestra now includes two Taiwanese cellists and one Taiwanese violinist. All play piano, and one of the cellists takes his piano lessons from Doug.

“The piano is a really great place to get a musical education, you know. If you think about it, the way the keyboard is laid out and the way your hands extend across the different keys make it the only instrument that lets you see all the notes and also play multiple notes simultaneously.”

As for Korea, “All of the eight or so young people that I heard play in Seoul were terrific. One of them had been sent to audition for me by a former student of Ransom Wilson’s.”

There were plenty of other Academy grads to reminisce with at alumni reunions in Seoul and Taiwan.

“They included a number of players, and some conductors, with the best orchestras in those countries—even their national orchestras.”

The alumni reunions were reminders of the brilliant job that Idyllwild Arts has done for many years in training young classical musicians. With teachers like Doug and Dr. Yaryan still here, joined now by Ransom Wilson and Greg Robbins, that elite training is sure to continue.