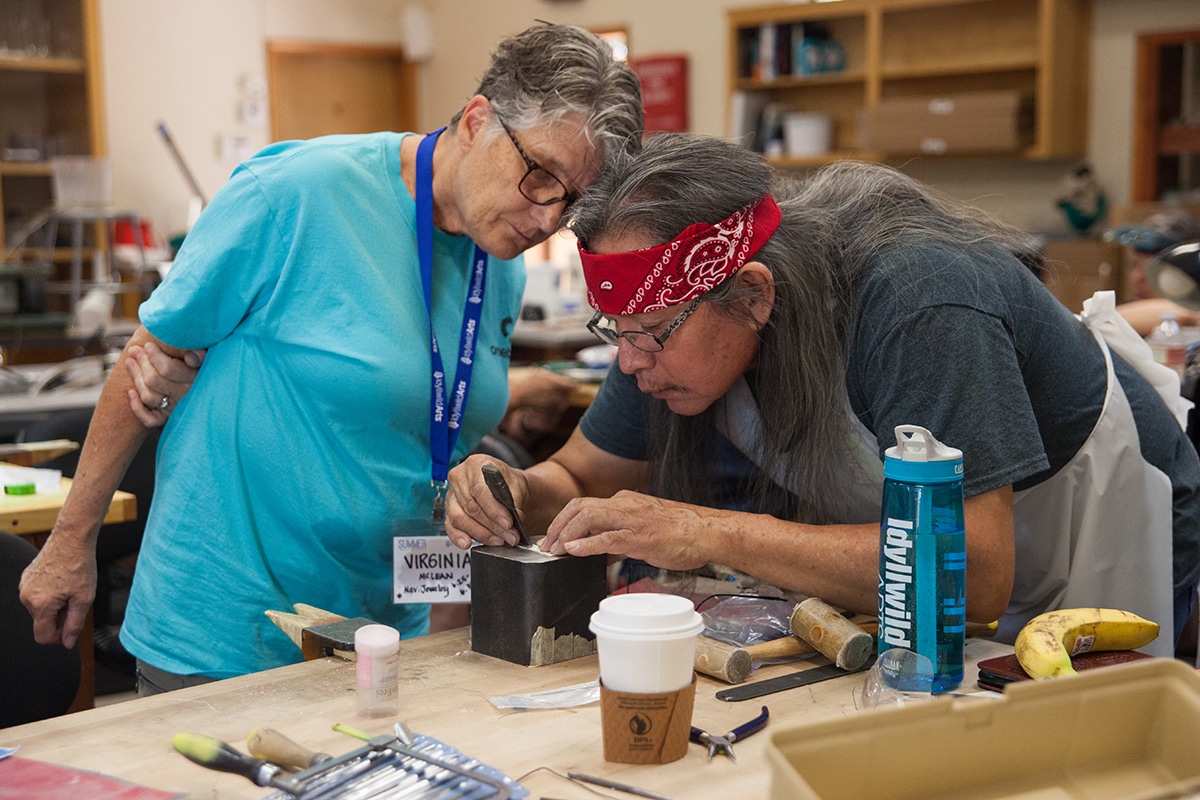 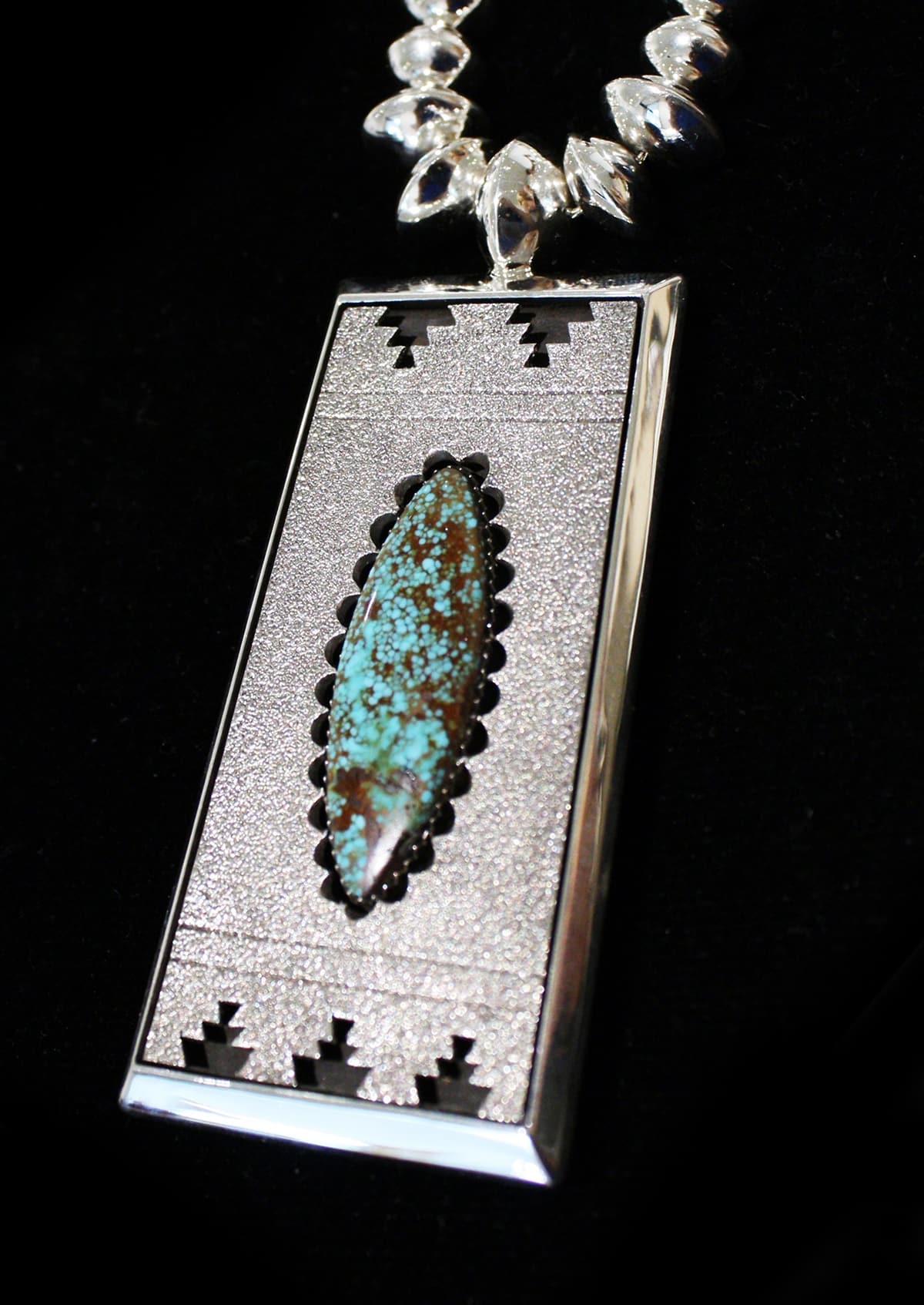 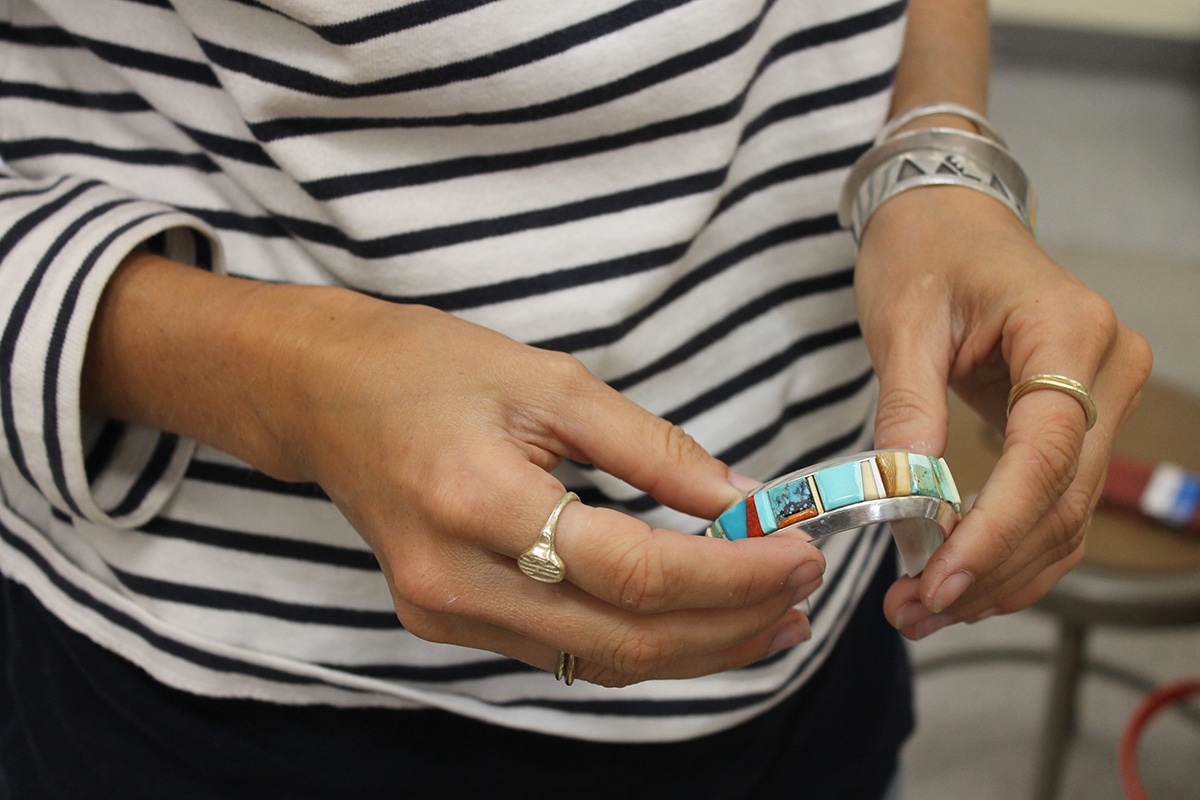 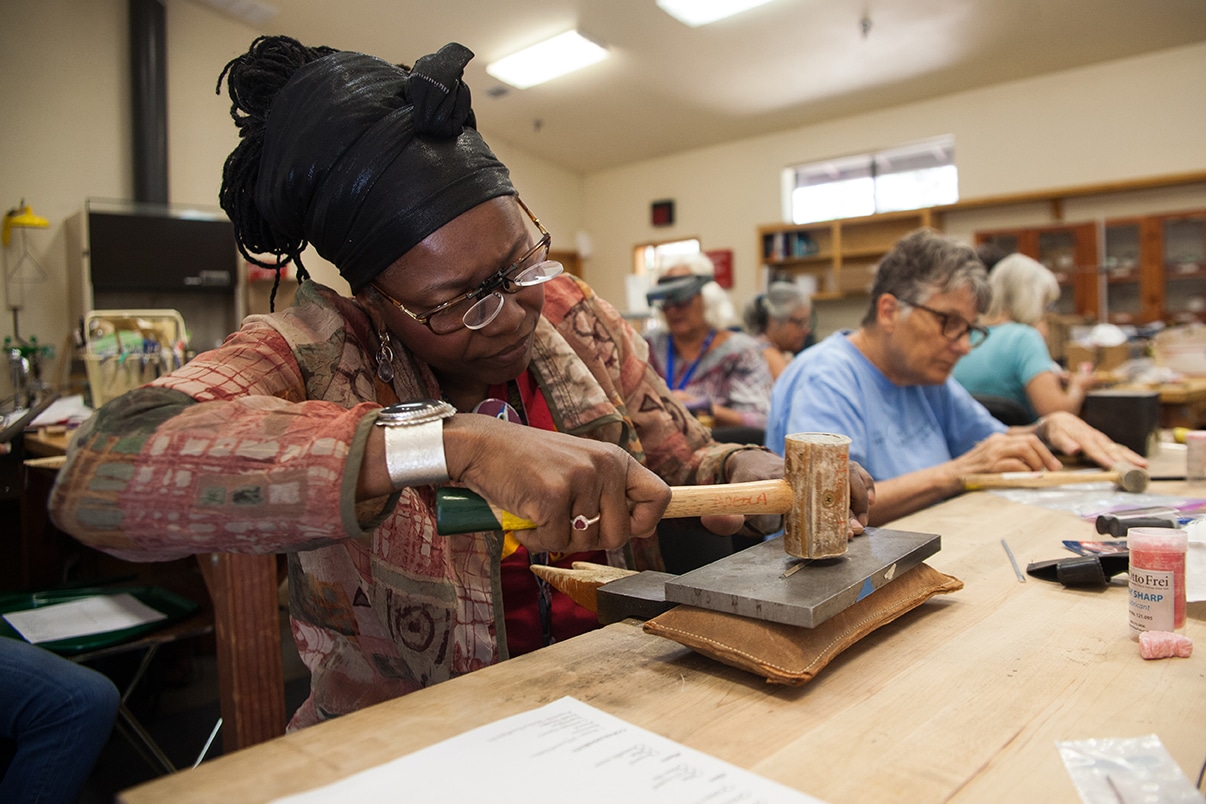 Working directly with Richard Tsosie, a leading contemporary (Diné [Navajo]) jeweler, you will design patterns and create colorful collages in semi-precious stones. You will learn how to operate lapidary equipment to cut, grind, and polish stones to set into the silver form of your choice, such as bracelets, pendants, belt buckles, and rings which you will create!

This summer we will offer two Navajo Inlay workshops that will allow for enthusiasts of all levels to join the workshop for up to two weeks! You may take one or both workshops allowing you extra time to work alongside Richard.

Tsosie will share techniques that had solidified him as one of the best Diné (Navajo) jewelers in the country, such as his trademark technique of granulation which was discovered by accident when he noticed silver filings were fusing onto a ring he was soldering. He calls the process that produces this granulated surface texture “fusion,” He has been perfecting the technique throughout his career. Safe use of lapidary equipment will be covered, and safety precautions followed when working with cutting materials and using chemicals. If you have no prior experience in metalsmithing, you will learn the basic techniques and concepts for shaping silver. If you are a returning student or have experience, you will expand your knowledge and conceptual jewelry-making approach.

Basic tools, equipment, solder, and compounds will be available for your use in class, so you are not required to purchase any new items for the workshop.

Richard Tsosie (Diné [Navajo]) is a jeweler and sculptor from Flagstaff, Arizona, and the Wide Ruins area of the Navajo Nation and is currently living in Scottsdale, AZ. His work has been featured in American Indian Art Magazine, Arizona Highways, the video Beyond Tradition: Contemporary Indian Art and Its Evolution, and several books, including Southwestern Indian Jewelry by Dexter Cirillo and Enduring Traditions, Art of the Navajo by Jerry Jacka. His art is on permanent exhibition at The Smithsonian, The Heard Museum, The Museum of Us in San Diego, and The Museum of Northern Arizona. His artwork has been featured in the magazine Arizona Highways and photographed by renowned photographer Jerry Jacka.

Richard’s contemporary silver and hold work features fabrication, overlay, and granulation. He is also known for colorful inlay work with various natural stones and his fine degree of control and attention to detail. His designs are motivated by images of the natural world, particularly the Wide Ruins area of the reservation, where he spent a large part of his youth. Richard says of his work, “I am inspired by the colors of the mountains at sunset, the patterns of shadow and light that emerge at dawn, and the pinpoints of starlight against the black night sky.”

His pieces typically contain the symbol for lighting and an arrow pattern. The lightning stands for natural causes, while the arrowhead symbolizes man-made elements. Richard says the design represents the ups and downs of life. “Some things we can’t do anything about, and you should try to enjoy life to the fullest.”

He also explains that his designs represent the beauty of life. The arrows are things that come naturally, like lightning in the sky. There are ups and downs in life, as in his designs, which makes you strong.

Generous donors have made scholarships and fellowships for adult workshops available on a limited basis for these specific groups:

Scholarships include tuition, dorm housing, and all meals provided by the campus dining service.

Lab Fee: $45, includes the use of all tools, equipment, and consumables such as solder and compounds; you may be asked to bring additional materials.

Skill Level: All levels, basic experience with silver is helpful

Enrollment is limited to 12 students.