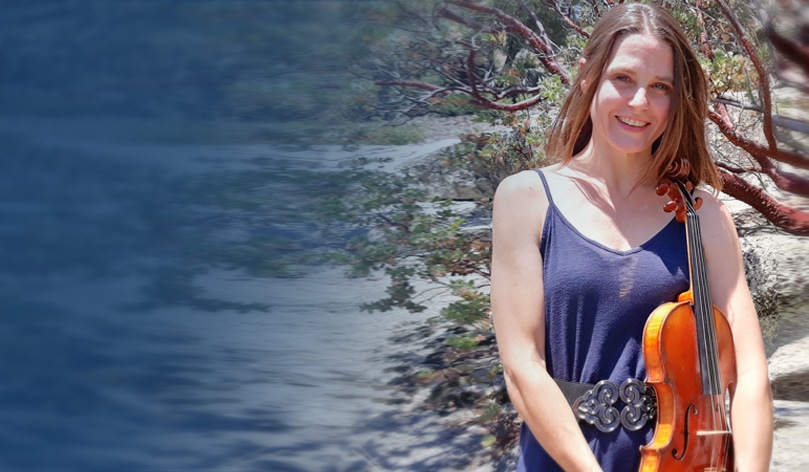 While Netz’s previous positions at Idyllwild Arts, as Coordinator of Music Partnerships since 2019 and before that as Orchestra Manager, have prepared her to take over the Chair’s administrative and leadership duties, her musical credentials were established long ago. She is a fine violinist, having earned both her Bachelor’s (1999) and Master’s (2003) degrees in Music from the prestigious Eastman School of Music, in Rochester, New York. She pursued further graduate studies at the former Royal Scottish Academy of Music and Drama, now the Royal Conservatoire of Scotland.

She especially loves early music, and has led the Academy’s Baroque ensemble. Yet she has also expressed her love of the entire classical tradition by teaching Music History. In addition, she has taught Senior Seminar, which, she explains “prepares our Music majors for the practical aspects of a music career: informing them about the wide range of career possibilities, teaching them about marketing themselves and about making connections.”

She taught for eight years at Central Washington University, an hour and a half south of Wenatchee, the small city where she had gone to high school, on the Columbia River in north-central Washington. But Idyllwild has been home to her and her husband and three children for nearly a decade.

Netz says the Academy Music Department’s leadership during her time in Idyllwild has built a department that she feels “absolutely fortunate to work with.” She adds that “As Chair I intend to support and move forward with the great things the department is already doing–in particular, they’ve started to create a major in Music Technology.”
The Music Department currently offers majors in Classical Music, Jazz, Songwriting, and Voice. But the development of a full curriculum in Music Technology is justified by industry demand for this skillset. With a Music Technology major, Netz believes, Idyllwild Arts will do an even better job of teaching the breadth of skills needed for a modern musical career.
“We’re also looking at the possibility of awarding some dual distinctions,” she goes on to say. “Students especially interested in becoming music teachers will be much in demand if they can play–and therefore teach at a high level–both violin and viola or both clarinet and oboe, for example.”
And she is thrilled about the launch, planned for this October, of a multigenerational community strings program.
“I’m prepared to teach violin, viola, and cello myself. But the students in the Academy’s Classical program are great kids, so I know that some of them will love the idea of joining me in teaching and playing with people from the town of all ages and all skill levels.”
Netz’s smile shows that her own love of the idea is sincere.
“It does beautiful things for a community when you can get that kind of broad range of people to make music together.”
The Idyllwild Arts Music Department is already a beautiful thing. Heather Netz is right to feel fortunate to work with it. But her expertise in music and her passion and excitement for what music can do for people suggest that the Idyllwild Arts Music Department will also be fortunate to work with her.