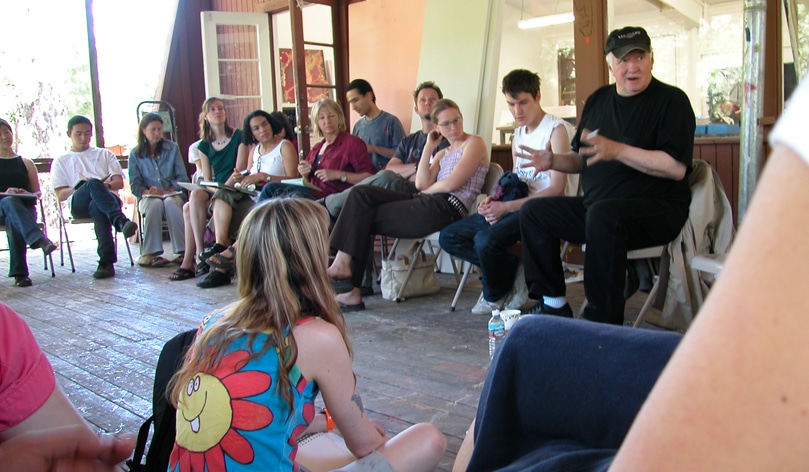 When he died on December 13 at the age of ninety-one, Roland Reiss left behind a distinguished record of artwork that “spanned Abstract Expressionism, the plastic arts, and representational painting.” Reiss talked about his work in this retrospective film.

However, it was by directing Painting’s Edge summer artist’s residency at Idyllwild Arts from 2002 to 2008 that Reiss expressed his endlessly magnanimous appreciation of the work of other artists. In doing so, he made an enduring impact on Idyllwild Arts.

“Our office still gets inquiries about Painting’s Edge,” says Heather Companiott, longtime director of the Idyllwild Arts Adult Arts Center and the Native American Arts Program. “That’s even though the financial crisis of 2007 and 2008 ended the program.”

Reiss’s generosity also left a profound impression on Heather herself.

“That impulse to give came with being a teacher; as a teacher, you’re there to inspire people. He brought famous artists to campus for Painting’s Edge, and the thirty students chosen to take part would get one-on-one critiques from them. The afternoons were magical: group conversations facilitated by Roland—who was a great facilitator—and focused on one of the visiting artists, with all the visitors and students sitting in a big circle outside on the deck of Studio A, behind the Summer Program building, overlooking the meadow across the road.”

Of course, the entire Painting’s Edge program would have been magical: painting in a community of gifted painters, then hearing from a different brilliant faculty member every day, in conditions that made digesting the artists’ reflections as natural as digesting the dinner that would follow the conversation. Time to speak and listen had to be allotted so abundantly because, for Roland Reiss, there was always more to learn.

Reiss was in his early seventies when he began directing Painting’s Edge, yet “he seemed youthful in his approach to life,” Heather recalls. “He wasn’t satisfied just to create the program and say, here it is. He wanted to rethink the program every year to keep making it better. And that youthfulness—that restlessness—of thought didn’t end when Painting’s Edge ended. I stayed in touch with him, and even in his eighties, even to the end, he was constantly exploring new ideas and new approaches to creativity.”

“He was nervous about driving up the mountain from LA,” Heather laughs. “So even though he was anything but a prima donna—he was the opposite—we would need a driver to bring him here. He would arrive on campus and climb out the passenger’s side and start unloading box after box of art books. The books would be available as a resource to all Painting’s Edge participants throughout the two weeks of the program. And talk about generosity: he eventually donated the whole collection to the Idyllwild Arts Visual Arts Department!”

Reiss’s death follows close on the heels of the death of veteran Summer Program faculty member Barbara Drake, a revered Native plants expert. They helped establish the tradition for passionate, deeply informed teaching that sets Idyllwild Arts apart. The current faculty continues to uphold that tradition. Yet, needless to say, Reiss and Drake will be deeply missed.