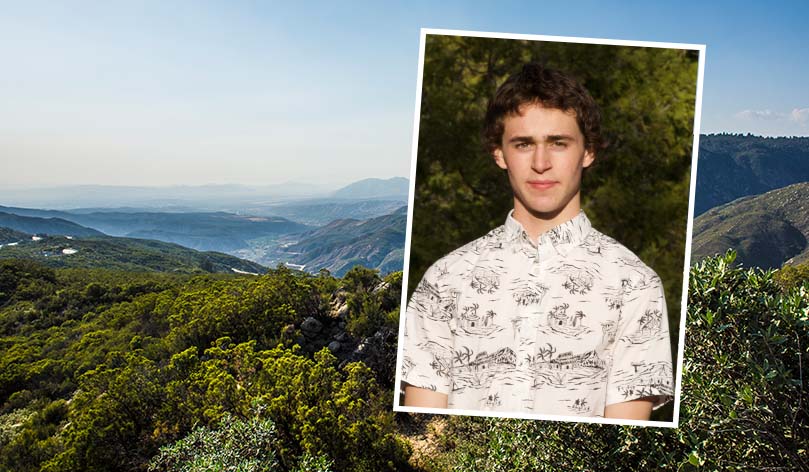 Carson Tanner’s Art in Society–sponsored IDY Talk in Stephens Recital Hall (and here on Zoom) on Thursday evening, May 5, at 7 PST, makes the case for pursuing a career rooted in your passions. His IDY Talk might make the case as strongly as his passionate artistry on jazz saxophone does.

In this final IDY Talk of the 2021-22 school year, the three-year senior from Palm Desert, an hour’s drive from Idyllwild, admits that he was not always confident about his prospects for a music career. Idyllwild Arts often hears from alumni about their success as professional artists, but also as surgeons, environmental scientists, inventors, entrepreneurs, high-tech executives, immigration lawyers, and even high-end wedding planners. Yet the myth of the “starving artist” persists, despite abundant research proving that it’s nothing more than a myth.

The myth is widespread and it touched some members of Carson’s family. Understandably, the concerns affected Carson himself.

Then, in between his junior and senior years at the Academy, he reconnected with a jazz master whom he had learned from earlier during his time at Idyllwild Arts.

At the Idyllwild Arts Summer Program, Carson was serving as a Student Ambassador, informing Summer Program participants of the virtues of the Academy. He was also taking classes. One of his teachers was John Daversa, the celebrated trumpeter, composer, arranger, producer, bandleader, and educator.

“Although I’d taken classes from him before,” Carson says, “we’d never really talked. But one day I found myself standing next to him in the lunch line in the dining hall. I told him about my fears and he understood. He’s a Grammy-winner now, but he was a young musician once!”

Daversa recalled the dissatisfaction of performing what he called “commercialized” music early in his career, because he worried that no one would listen if he played the kind of jazz he loved. He finally decided, rather than to accept the dissatisfaction, to make a commitment to what he loved, in the faith that “things work out when you follow your passion.”

Carson accepted the suggestion that by working hard to become good at something — and the hard work comes naturally when that something is an object of love — one becomes good at becoming good. The lessons learned about one’s strengths and limitations in the attempt to achieve mastery of something are transferable to the pursuit of other goals. The lessons embed themselves as a sort of muscle memory, so that the passionate person does not tire of the pursuit even if the goal changes.

This is why the Academy graduates who have become surgeons, scientists, inventors, etc., credit the Idyllwild Arts experience with shaping their subsequent careers, even when these seem to have nothing to do with the arts.

Beginning this fall, at the University of Southern California’s Thornton School of Music, Carson will continue his pursuit of saxophone mastery, inspired not only by his occasional lessons from John Daversa, but by three years of intense study with the Academy’s outstanding regular jazz teachers, Paul Carman and Marshall Hawkins.

And he is inspired by Sonny Rollins, now ninety-one years old and in Carson’s opinion “the most pure improvisational artist on jazz saxophone.”

In addition, he is inspired by Immanuel Wilkins, almost seven decades younger than Rollins but just a few years older than Carson himself.

Young artists like Wilkins, and like Carson, who will speak here on May 5, 7 PST, remind us that the passion that has motivated Davis, Coltrane, Armstrong, and Rollins lives on, and that our lives are enriched by passion, wherever it leads us.