“There are a lot of preachers and musicians in my family,” Clayton Powell says.

The man who teaches piano and percussion for Idyllwild Arts Academy’s Jazz and Songwriting programs has not been ordained. But he could be said to approach music with an evangelical fervor.

Powell’s unstoppable nature may have been assured by his descent from J. Vance Lewis (c. 1853-1925), who wrote of coming “out of the ditch” of slavery in Louisiana to build a thriving law practice in Chicago and later in Houston. But he was also given a great name to live up to: that of the legendary pastor and politician Adam Clayton Powell Jr. (1908-1972), United States Congressman for New York’s Harlem neighborhood from 1945 to 1971.

“What people like Martin Luther King and Malcolm X did would have been impossible without Adam Clayton Powell,” he says proudly.

He was born in San Bernardino, California. That’s only a little more than an hour northwest of Idyllwild, yet he took a few decades to find his way here. Four years with the U.S. Marines and another eleven years with the Army intervened.

“I was in the Marine Band and the Army Band,” he explains. “But as a military musician you have to be combat-ready in case you’re deployed to a conflict zone, and one of the places I served was Iraq. During my six-month tour there, in 2003, I helped provide security for convoys.”

“Was it dangerous? Ha! Who’s providing security for the security details?”

The soldiers in Powell’s platoon celebrated one another’s birthdays. However, he was denied a birthday celebration.

“On April 28 we were thinking about somebody else,” he laughs. “That also happened to be Saddam Hussein’s birthday. My celebration the next day was that I got to do push-ups.” 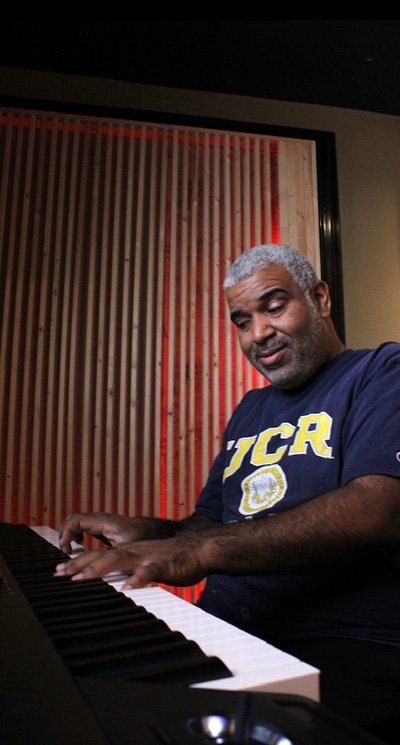 In the military, Powell did more than build strong shoulders and visit seventeen countries on five continents. He also completed the Combat Lifesaver Course that set him on the path to the other role he now fills at Idyllwild Arts: besides teaching piano and percussion, he works as a nurse in the Health Center!

Oddly, the nursing career that he pursued after leaving the Army would bring him to the attention of the Idyllwild Arts Music Department.

“I came home to Southern California, and I attended Summit College for the Licenced Vocational Nurse Program and Riverside Community College for the prerequisites for the Registered Nurse program. I had a job at an assisted living facility in Escondido, in San Diego County.

“One day I was playing piano in the lobby when one of my patients who happened to be a good friend of Marshall Hawkins heard me. He had a certain credibility as a judge of jazz musicians: his name was Ken Lesight and he’d played the trumpet with Frank Sinatra and Les Brown! Well, Ken called Marshall and said, ‘Man, you’ve got to hear this piano player.'”

His playing would impress both Hawkins and Dr. Jeanette Louise Yaryan, now the Academy’s Assistant Head of School but previously a classical piano instructor and, for two years, the Music Department Chair. Yaryan, whose mother is a pastor, was deeply moved by Powell’s rendition of “Amazing Grace.”

Powell started teaching at Idyllwild Arts in 2014. Since that time, his friendship with his own pastor, Dr. Craig Smith, in San Jacinto, forty minutes from Idyllwild, has yielded benefits that are musical as well as spiritual.

The two men conceived of a recording studio for “the music and messages for Redemption Radio, a radio preaching and teaching program Dr. Craig started out of his house.”

From that beginning, Powell explains, the project “quickly morphed into everything from a recording studio open to the public to a learning center for all things music and recording arts and periodically a jazz club!”

The evolution of the idea is no more remarkable than the means of construction.

“I built it with my children. We only had the afternoons to work because I was spending the mornings homeschooling them.”

At fifteen hundred square feet, Redemption Radio & Shelter Studioz is big enough to accommodate “every kind of music and musician you can think of,” including jazz big bands—and Marshall Hawkins, who “will be recording his next project” in RRSSOZ.

Powell reports no frustrations with the studio. Yet he admits that its co-owner, Dr. Smith, “was overheard saying 1,500 square feet just isn’t enough, we probably need more like 5,000.”

If a large talent requires a large space, the pastor may have been trying to calculate the number of square feet needed to hold the outsized talent of Clayton Powell.