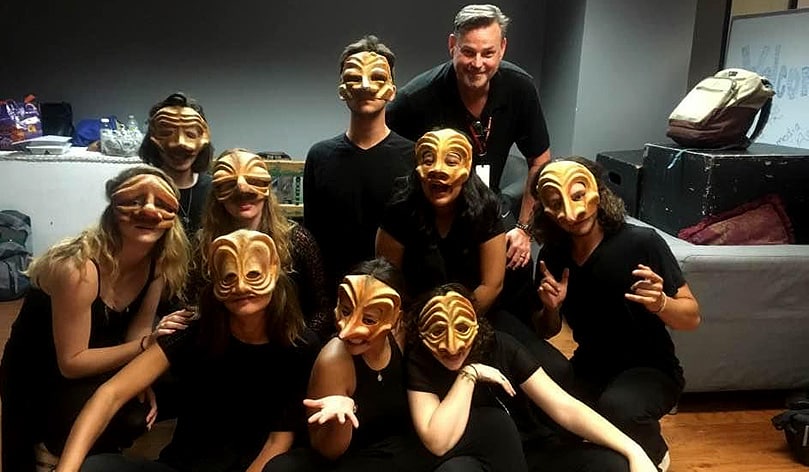 Denis McCourt Stryjewski expresses his love of theatre so forcefully that it seems the theatre must have consumed his entire life. Yet Idyllwild Arts Academy’s new Acting and Theatre teacher did not dedicate himself to the craft of stage and film performance until he had reached his early thirties, just over a quarter of a century ago.

Denis says that when he began studying theatre at the University of South Florida, “I was finally going toward me”–and, in fact, the decision to study theatre was only part of a radical renaissance of his life.

However, his USF Theatre studies did not introduce him to performing for the first time. Until he was in high school he lived in New York City, in the Woodhaven neighborhood of Queens, where his father served on the NYPD. He attended Catholic schools, and “starting at age five was involved in performing in plays and musicals.”

He was a soloist for the New York City All Boys Choir. And as a flutist, he was admitted to the High School of Performing Arts, in Manhattan. 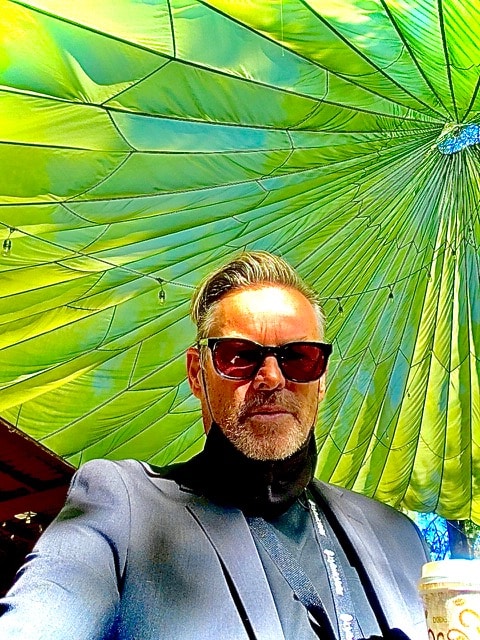 “But my father retired from the police force and–like people from New York do when they retire–then he moved the family to Florida.”

The move was not to Miami but to Dunedin, on the Gulf Coast, forty-five minutes west of Tampa. He went to Dunedin’s public high school, where football was huge.

“The marching band for the games was a hundred-twenty strong. Obviously I joined, but not to play the flute. As you might guess from the name, Dunedin has historical links to Scotland.”

(The name comes from Dùn Èideann, the Scottish Gaelic for Edinburgh.)

“Well, the marching band needed someone to volunteer to learn to play bagpipes, and. . . guess what!”

“I did Scottish Highland dancing and I even competed nationally.”

After high school, at St. Petersburg College, his interest in his music major faltered–perhaps surprisingly, with so much performing behind him.

“I began a path of doing what other people expected me to do. This included ten years of marriage to my wife and a successful career as a Certified Financial Planner.”

However, doing what other people expected him to do didn’t feel right to Denis.

“My artist self was missing. And so was something else.”

At age thirty-two, his rebirth began. He came out as gay to his wife, and to the world.

“I went back to college, transferring my St. Petersburg College credits to the University of South Florida, in Tampa. In 2003 I graduated with a BA in Theatre, with an emphasis on Performance.”

At USF he had the honor of working with British masters like Corin Redgrave, Tim Carroll, Sir Donald Sinden, and Matthew Francis. From these legends he learned how to handle classical texts and the heightened language of Shakespeare.

Then, in 2008, he received his MFA from the University of Florida, in Gainesville.

“While at Florida–Go, Gators!–I grew as a person and as an actor/artist and became ready to commit to the craft. My takeaway from graduate school was that ‘I Am Enough.’ This is the foundation of all of my work, including teaching the young international artists here at Idyllwild Arts Academy.”

He and his husband, Leon, have enjoyed many adventures around the world during more than twenty years together. After graduate school they moved from Florida to Long Beach, in Southern California. Several years later they bought a weekend home in a neighborhood southeast of Idyllwild, where they now live full-time. When Denis gets up in the morning to prepare for the scenic forty-minute drive to the Idyllwild Arts campus, he thinks about his happiness “in being able to do something creative every day.”

Before joining the Academy’s Theatre faculty, his creative ventures in Southern California included ten years as the Associate Department Chair of Acting at the Los Angeles campus of the New York Film Academy, serving as a co-Artistic Director of the Long Beach Shakespeare Company, and serving as Director of Education and Outreach for Coachella Valley Repertory and as a Teaching Artist with the McCallum Theatre, in Palm Desert.

He has performed in film, television, commercials, musical and non-musical theatre, and opera. He has acted on the stages of Greece’s ancient amphitheatres and he has portrayed Joe Pitt in Angels in America and Gayev in The Cherry Orchard. He has directed well over a hundred theatrical performances in Southern California and he is a proud union member of the Screen Actors Guild – American Federation of Television and Radio Artists and of the Actors’ Equity Association.

So far, Denis has been deeply impressed by the Academy’s Theatre students. In particular, he is exhilarated by the chance to work with aspiring performers from many different countries.

“Although it’s not new to me,” he points out, since he had taught international students and students whose first language was not English at the New York Film Academy, and elsewhere.

He recalls “one of the most powerful auditions I’ve ever watched,” by a woman hoping to earn a role in Long Beach Shakespeare Company’s production of Anna in the Tropics, the Pulitzer Prize-winning drama by the Cuban-American playwright, Nilo Cruz.

“She asked if she could do the audition in Spanish and for some reason I said yes. You have to understand that I don’t speak Spanish. But it didn’t matter!”

The woman’s performance was an extraordinary reminder that “there are certain common elements in acting and the human condition that transcend language.”

Denis McCourt Stryjewski speaks of his passion for discerning and teaching those common elements. That passion is one of the reasons why at Idyllwild Arts, whose students come from thirty or more different countries, he should be able to continue “going toward me” for many more years–while also helping students go toward themselves.

Les Misérables for the Next Generation

Gavroche, the new musical that the Idyllwild Arts Theatre Department will perform on December 3, 4,…