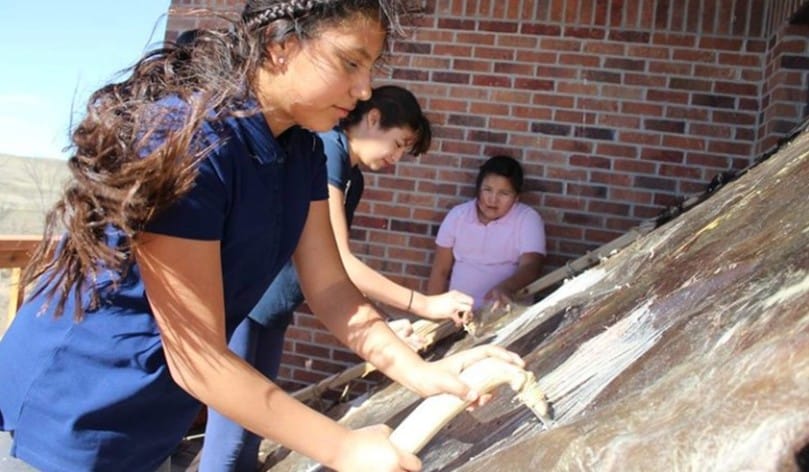 Pictured above: Working on the tipi project.

The material poverty of the Pine Ridge Indian Reservation for the Oglala Lakota Native Americans, in South Dakota, is counterbalanced by the efforts of many people on the reservation to draw upon the riches of Lakota history and culture, especially in educating Lakota children.

In October, Marianne Kent-Stoll, Vice President of Educational Programs for Idyllwild Arts, visiting Pine Ridge for the third year in a row as she tries to build an educational partnership with the reservation that might include teacher or student exchanges, witnessed some of those efforts.

At Pine Ridge Girls’ School, Randilynn Boucher gathered half a dozen girls in a tiny classroom. They were all of the members of the school’s eighth-, ninth-, and tenth-grade classes. Pine Ridge Girls’ School owes much of its sense of intimacy to its size: it occupies a recently constructed brick building that is no larger than a modest middle-class home.

Ms. Boucher had brought the girls together so they could listen to one of them report on her 2019 Idyllwild Arts Summer Program experience. The girl, now in ninth grade, had met Marianne and Idyllwild Arts Academy InterArts Chair Abbie Bosworth the year before during their visit to Red Cloud Indian School. As an eighth-grader, she’d acted in Abbie’s devised A Midsummer Night’s Dream at Red Cloud.

She’d started reading Shakespeare at home and then seen Abbie again over the summer, when she did a two-week Theatre course. Her mother is a librarian and archivist twenty miles to the northeast at Oglala Lakota College, founded in 1971 as American Indians across the country were taking control of their education as a means of controlling their destiny. Both the girl and her mother had come to regard Abbie not merely as the girl’s teacher, but as her mentor.

She spoke shyly because she’s “the new girl” after her transfer from Red Cloud. But she also smiled as she told her classmates that she wanted to go back for the 2020 Idyllwild Arts Summer Program.

After the girl had finished talking about Idyllwild Arts, Marianne asked Ms. Boucher about her role at Pine Ridge Girls’ School.

A Model for Idyllwild Arts

“I’m the Math/Science/History teacher,” she said.

Marianne may have wondered if the little brick building had space to accommodate separate classrooms for Math, Science, and History. But Ms. Boucher’s explanation of how she teaches made such a question irrelevant.

“When the students start our tipi project, they start with math. They come up with an idea of how many people would live in it and then do calculations to determine the size and what the supporting structure would be like. That’s architecture, and of course architects have to use math. Then they have to use chemistry to learn about preparing the hides for the covering, and tanning hide into leather involves a chemical process. But all the time the students are also learning the history and cultural significance of tipis: how and why their ancestors used them, why the Lakota still use them today. . .”

“You could say I’m teaching art, too, since the students decorate the tipi—and the geometric designs they choose are tied into Lakota history once again.”

“This is a model for the kind of interdisciplinary education that we want at Idyllwild Arts Academy,” she said to Ms. Boucher. “We’re trying to educate the citizen/artist, but you don’t do that by sequestering art from other subjects. If art is separate from everything else, it becomes at the least a hobby, or at the most a vehicle for the artist to try to become famous. Artists have to know how to work with people who don’t consider themselves artists, and above all with the community, which has certain needs that artists can satisfy—in the process enjoying their own great satisfactions.”

Obviously, Pine Ridge Girls’ School implements another kind of sequestration: from boys. But even though the coeducational model works for Idyllwild Arts Academy, under different conditions the girls-only model makes sense. Pine Ridge Girls’ School has described the global and local contexts for its founders’ choice to go girls-only. It’s clear from those descriptions that the choice was considered just as carefully as Randilynn Boucher deliberates over her comprehensive lessons in Math, Science, History, and Art.