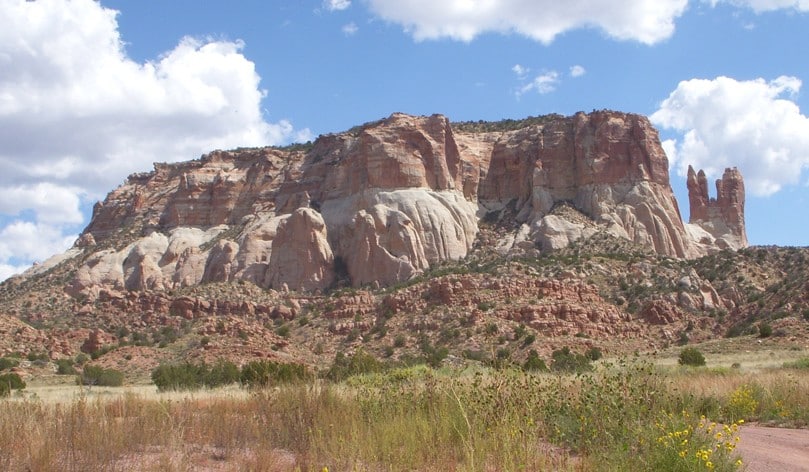 Idyllwild Arts Academy Assistant Head of School Marianne Kent-Stoll had thought that a single photograph of the Yaqui Indian church, taken from more than a hundred meters away, would do no harm. But a man’s voice, its owner invisible behind his car windshield under the punishing sun, had instructed her to put her cell phone away. She obeyed.

She still had to confront the ten-year-old Yaqui boy who’d been assigned to help guard the church as Easter Sunday approached. He didn’t trust her.

“Show me,” he said when Kent-Stoll promised that she hadn’t taken any pictures.

He bent over her cell phone, his cowboy hat shading the images. Satisfied, he turned away. Kent-Stoll and her guide, Wendy Weston, went into the tiny church. Just inside the entrance they stood on the dirt floor and looked at the profusion of statues of the Virgin behind the altar, a few steps in front of them.

Kent-Stoll and Weston had traveled only a minute or two by car from the glittering shopping malls and spacious middle-class homes of Phoenix and Tempe. Yet that minute or two had put them deep inside the town of Guadalupe. The town’s six thousand residents, mostly Yaqui and Latino, occupy barely four hundred acres of land, a little more than Dodger Stadium devotes to parking lots. A third of Guadalupe’s inhabitants live in poverty and a little over half of its children graduate from high school.

Guadalupe’s jarring combination of proximity to, but alienation from, the world familiar to most Americans makes it an extreme version of what Weston wanted to show Kent-Stoll during three days of driving through Arizona and New Mexico. Weston, a Navajo (Diné) from the Four Corners region, has intimate knowledge of how the United States has both swallowed the Indian Nations and kept them at a distance.

Weston drove Kent-Stoll through the Southwest in order to acquaint her with some of the communities from which Idyllwild Arts Academy hopes to recruit greater numbers of Native American students. The creation of more productive recruitment strategies is an important goal for both Kent-Stoll and Weston, a consultant for the Native American Scholarship Learning Grant, funded by Margaret A. Cargill Philanthropies. Yet the road trip meant far more than that to both of them.

The idea of traveling together emerged from Kent-Stoll and Weston’s weekly conversations about the opportunities that arts education can open up to young Native Americans. Their meetings have included discussions of how honoring Native American culture, family, and traditions would not only support the Academy’s Native students, but also enrich the larger Idyllwild Arts community. But how could these things be accomplished without visiting Native communities and listening to the stories of the people who live in them?

Weston has enabled Kent-Stoll to get to know people she would otherwise never have met, including the Maricopa (Pee-Posh) and Kwatsan artist Yolanda Hart Stevens.

“This is the Gila River reservation,” Hart Stevens said as she climbed into Weston’s rented Ford pickup, parked outside her home on the reservation. “I grew up here, but I’ve never seen a Gila monster.”

What she has seen more and more of over the years is “town,” meaning the city of Phoenix. Hart Stevens is about sixty years old. She recalls that during her childhood, some of the Maricopa elders would tell her that “You’ll see town some day.” She and the other children scoffed. But a new freeway will open up soon. It will border one side of the Gila River reservation, walling off its modest homes from the much bigger houses of middle-class Phoenix residents that thrust up against the freeway’s far side.

More Trouble for the Assistant Head 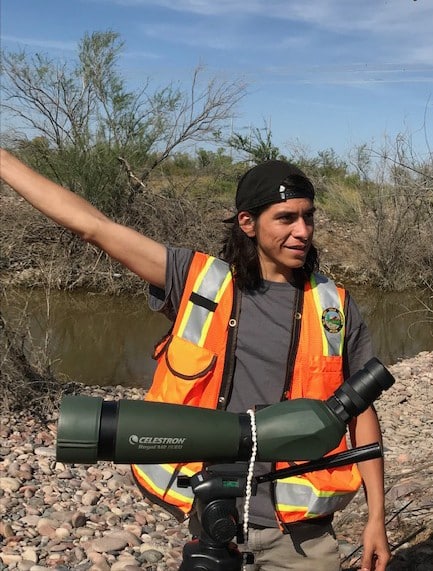 Hart Stevens directed Weston off-road, toward a spot where she hoped they could observe a baby eagle in its nest. They got out of the truck and made their way over the scrubby terrain. They’d walked less than a quarter of a mile when they saw a man approaching them. He wore an orange hunting vest.

But the second thing to become visible after his orange vest was the white of his teeth. Still smiling, he introduced himself as David Romero. He said he’d recently started volunteering for the nonprofit that protects bald eagles in the area. He and his girlfriend, Sarah, were happy to have company.

Did the visitors want to look through his telescope?

The eagle’s back was turned, but the telescope afforded a view of its beak as the baby looked from side to side.

“It hatched on January 23,” Romero said, “making it”—he thought for a moment in order to get the date right—“two months and one day old.”

Romero himself was practically a baby: in his early twenties, and a rookie firefighter.

“And I’m on the Tribal Youth Council,” he added, “trying to help the young people on the res make good choices.”

Bad choices by young people were often on Weston’s mind during the trip. The day after their eagle sighting, she and Kent-Stoll traveled nearly three hundred miles northeast of Phoenix, to Zuni Pueblo. This New Mexico community has produced an abundance of world-class art that is out of proportion to its population of a few thousand. The renowned Zuni potters Milford and Jaycee Nahohai live and work in Zuni Pueblo.

Weston and Kent-Stoll hoped to see the murals painted by the late Zuni artist Alex Seotewa (1933-2014) in Our Lady of Guadalupe Mission. Their astonishing beauty has prompted some people to call the little church, built in 1629, “America’s Sistine Chapel.”

But on a Monday afternoon the doors were locked. The seeming disrepair suggested abandonment. Weeds choked the adjoining cemetery. Disappointed, Weston let her gaze wander. Her eyes narrowed as she observed three young men.

“Doing a drug deal,” she said.

“When I was little I’d pass through here with my parents,” Weston recalled. “They’d say not to look at the men sleeping on the sidewalks. ‘You don’t want to see that,’ they’d say.”

Weston had hoped to show Kent-Stoll around her native Four Corners region. But the visits with friends on the way ran long and the distances ran on forever. From Gallup they drove another twenty or thirty miles north to see an older Navajo couple, who are Weston’s clan mother and father, and their adult son, who is Weston’s clan brother. The son, Eric, talked about the difficulty of finding work on the reservation since he doesn’t speak Navajo.

The sun was going down as they left. Weston knew that driving another hundred miles north to the Four Corners would be exhausting. So they turned west, back toward Arizona, to spend the night near Window Rock, the seat of government and capital of the Navajo Nation.

In the morning they faced the long trip to Weston’s home in Phoenix, where Kent-Stoll would collect her car and begin the even longer journey back to Idyllwild. But before heading south they had one more Native American community to see, ninety miles west of Window Rock. 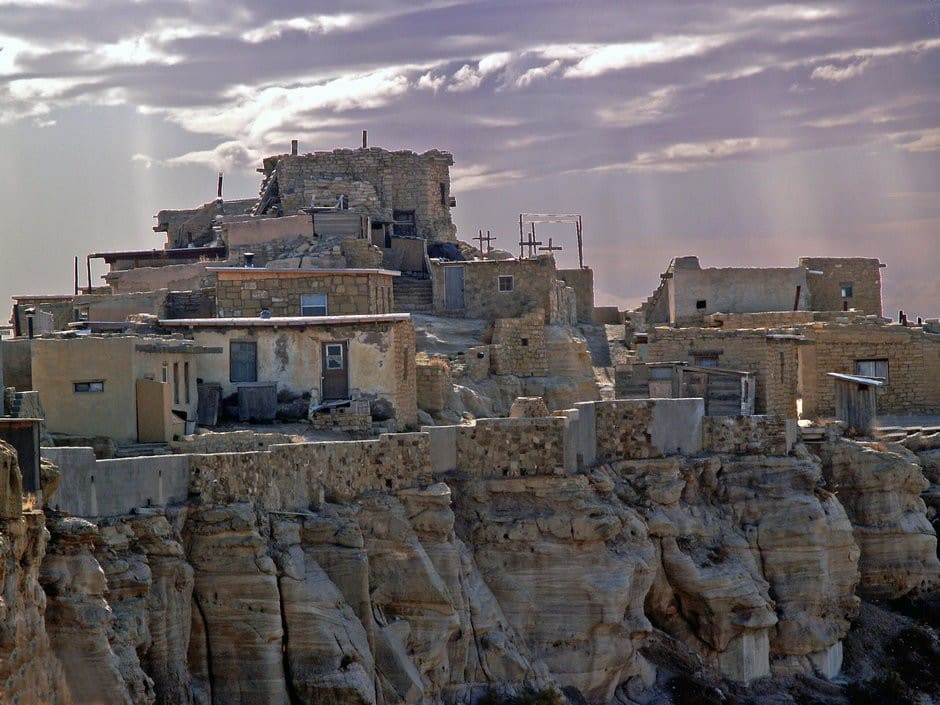 Atop the mesa, Kent-Stoll was awed by the endless view in every direction. And, having raised four children, she also thought fearfully about what it would be like to care for a toddler in Walpi. In some places, only a few meters separated one flank of the mesa from its opposite.

On the drive to Phoenix, Kent-Stoll commented on the importance of visiting tribal communities and becoming acquainted with members of those communities as individuals.

“Through visits like these,” she said, “I know that Idyllwild Arts will appreciate Native American cultures more deeply and do a better job of serving Native American students.”

Kent-Stoll also spoke about how much she’d enjoyed the trip and how much she would like to see the same places and people again. She said she wished there had been more time and that she’d seen even more.