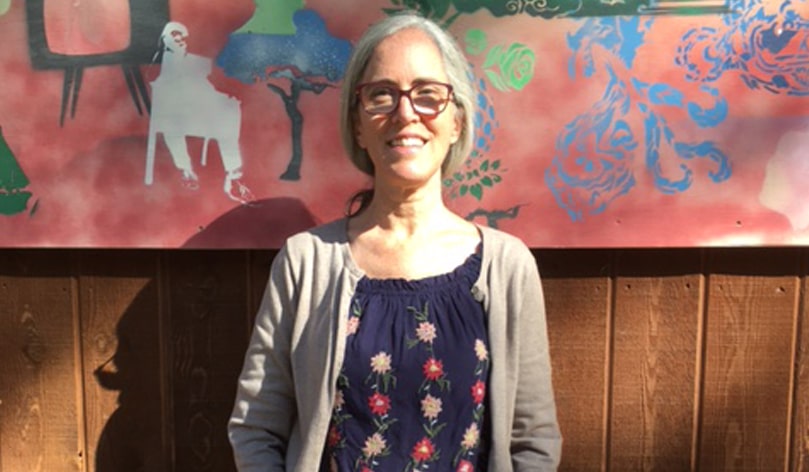 “I had to leave full-time teaching for a while to care for a family member,” she recalls.

She had started teaching Algebra and Geometry in September 2012, but family responsibilities overtook her during her second year at the Academy. By the time she was able to return–only weeks before the beginning of the 2021-2022 school year–it was good luck for Donna and good luck for the school’s Science and Mathematics Department that she had never gone farther away than Palm Springs and had recently moved back to the Idyllwild-Pine Cove area.

Her application to fill the open teaching position had somehow failed to find its way to Science and Math Chair Reina Meek.

“The start of classes was getting close,” Donna says. “It didn’t look good for coming back, but Idyllwild is tiny. . . So I happened to run into Reina one day when we were both grocery-shopping and she asked if I had any interest in teaching at the Academy again!”

It might have been the time to ask a mathematician what the odds had been of finding work in that way. (A non-mathematician might guess that the odds were decent in such a small town.) It might have been the time to ask someone who minored in Philosophy in college and who has not ruled out the eventual pursuit of a Philosophy Ph.D. if her return to the Academy had been “meant to be.” (Though Donna may have been less likely to give a direct answer than to answer philosophically, with a question: How can one ever know what was meant to be?)

Instead, Donna’s broad smile provoked a different question. She needed to draw on neither her training in mathematics nor her love of philosophy to answer this question: How does it feel to be back at the Academy?

Shuffle Off from Buffalo

Although the Idyllwild Arts community has become Donna’s home, it’s remote from where she grew up.

“Buffalo, New York! Yet I went all the way across the country for my undergraduate studies because I remembered a trip to Southern California that my family had taken when I was little. I’ve always loved California.”

Now she is back, and not only for herself: her daughter is new to the Academy as a tenth-grade Creative Writing major.

Idyllwild is home for Donna. However, she still has family in Buffalo.

“I”ve been trying to get my parents to move out here since I was eighteen.”

“But I can see my parents’ point of view. My father is a true Buffalonian who sticks out like a sore thumb during visits here!”