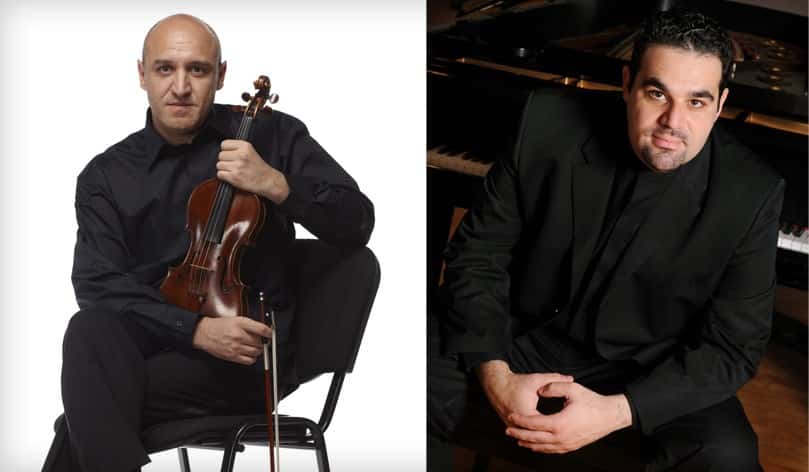 Former Idyllwild Arts Academy classical music students Jassen Todorov and Sarkis Baltaian have both been top prize-winners in a number of national and international competitions, Todorov as a violinist and Baltaian as a pianist. They’ve also been frequent collaborators, and their partnership continues this year as they record Ludwig van Beethoven’s final three piano and violin sonatas, in a stirring tribute to the composer whose music “gives hope even in the darkest times.”

The words come from Dr. Baltaian, Director of Instrumental Music at Orange County School of the Arts, in Santa Ana, California. But the idea to celebrate the 250th year of the birth of a man whose music “is bigger than life”—Baltaian speaking again—came from his lifelong friend, Dr. Todorov. Todorov, Professor of Violin at San Francisco State University, is performing and recording all ten of Beethoven’s sonatas for piano and violin during his year-long sabbatical from SFSU.

The recording will take place this June in Sofia, historic capital city of Bulgaria. Bulgaria is the native country of Todorov and Baltaian, friends for the past four decades, ever since Todorov was five years old and Baltaian four. They are also former roommates at Idyllwild Arts. In the early 1990’s, both attended the Academy, where Todorov was a student of the Academy’s beloved longtime violin instructor Todor Pelev, at that time a new teacher.

Todorov has become astonishingly skilled with a camera: winning the Grand Prize in the 2018 National GeographicPhoto Contest is among his many achievements. Yet his recording of the Beethoven sonatas indicates that he has no intention of setting aside his 1914 Enrico Rocca violin.

Have Violin, Will Travel

June will be exhausting as well as thrilling for Todorov, as he takes on his ambitious recording project in collaboration with Baltaian on the eighth, ninth, and tenth sonatas, and with two other pianists, both of them Russian, for the first seven sonatas.

Much of the exhaustion will be mental, since Todorov must count not only on his own health and safe travels, but on equal good luck for his three pianists.

Yet one undertakes such a bold project because the pleasure will outweigh the exhaustion. Some of the thrill will derive from reuniting with old friends and colleagues: Todorov and Baltaian live just four hundred miles apart, but of the other two pianists, one lives in Bulgaria and the other in Moscow. Another part of the thrill will come from travel: in preparation for their recording, Todorov and Baltaian will play a concert and judge a competition of young musicians in Ohrid, the Republic of North Macedonia’s picturesque “Jerusalem of the Balkans,” known for its breathtaking setting on the banks of Lake Ohrid.

Finally, of course, there will be the thrill of performing and recording Beethoven. Baltaian suggests that “To do his music justice when you play it, you need to find in yourself some of the composer’s own spirit of finding hope in the darkest times.”

One could argue about whether we live in the darkest times. But it seems impossible to argue that this kind of spirit is not always inspiring—a powerful reason to look forward to the release of the recording, about which our newsletter will keep you informed.