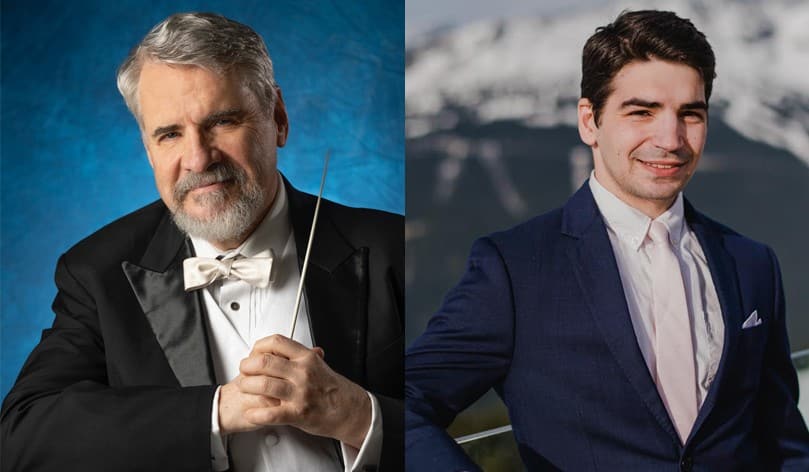 Idyllwild Arts Foundation welcomes new year-round Director of Orchestral Programs Ransom Wilson and Associate Director of Orchestral Programs, Gregory Robbins. Signaling the beginning of an exciting new era, in which the Summer Program and Academy will become more closely integrated, Wilson and Robbins have been brought on board this fall to build on the prestige and prominence of the existing program. Wilson is a world-renowned flutist, recording artist, chamber musician, and conductor who joins Idyllwild Arts from Yale University School of Music, where he is professor of flute. Robbins is a performer and educator who most recently served as the director of educational outreach at the Geneva Music Festival and executive director of the Young Artists Philharmonic.

The Academy’s new year-round format will allow for a truly dynamic teaching environment and promises a more holistic experience for students, providing access to a wider array of artists. Wilson and Robbins now oversee all components, including the Summer Program, ensuring consistency throughout. Wilson’s first performance with the student orchestra in Idyllwild will be on April 18 and he will also conduct the students at Walt Disney Concert Hall on August 9, 2020.

“We are excited to welcome Ransom Wilson and Gregory Robbins to the Idyllwild Arts family,” says Pamela Jordan, President of Idyllwild Arts. “We are confident that this new structure will further uplift talented students while giving those participating in the Summer Program a taste of life at the regular Academy.”

A graduate of The Juilliard School, Wilson was an Atlantique Foundation scholar in Paris, where he studied privately with Jean-Pierre Rampal. Since then, he has released twenty-seven albums as a flute soloist and eleven as a conductor, winning three Grammy nominations along the way. He has also accompanied dozens of internationally-renowned artists from the podium, including Itzhak Perlman, André Watts, Frederica von Stade, Joshua Bell, and Hilary Hahn. As an educator, he regularly leads master classes at the Paris Conservatory, Juilliard, Moscow Conservatory, Cambridge University, and elsewhere. Wilson’s new position with Idyllwild Arts is something of a homecoming: he conducted part-time at the school about ten years ago.

“I’m so pleased to be returning to Idyllwild Arts,” says Wilson. “It is a magical place, and the opportunity to work with gifted young musicians is a real privilege. My teaching approach is simple: I set the bar high, and students work as hard as they can to meet or even exceed it. For a teacher, nothing is more gratifying.”
Wilson and Robbins met at Yale University School of Music in 2010 and have since worked together in a number of places, including Redlands, California, where Wilson is Musical Director of the Redlands Symphony.

Robbins, who has spent much of his career working with schoolchildren, has guest-conducted numerous youth, secondary, and collegiate ensembles in the U.S. and Europe. He was also the conducting coach for Gael Garcia Bernal, star of Amazon’s hit series Mozart in the Jungle. He received his formal training at Yale School of Music and Manhattan School of Music. In considering the role, Robbins was inspired by Idyllwild as a truly unique and magical environment for students to engage in learning surrounded by nature and art. He recently moved to Idyllwild full-time to take on his new role.

Wilson and Robbins acknowledge a changing landscape for classical music and share the goal of ensuring that students are aware of their potential to carve out non-traditional paths towards professional success, without having to compromise their artistic integrity. In order to do this, they are programming a season of guest artists, lecturers, and concerts that are representative of the new trends in classical music. At the same time, they are prioritizing opportunities for students to garner inspiration from musicians who belong to the world’s great orchestras and chamber groups. Regular reading sessions will also ensure that Idyllwild Arts students gain experience with music from different eras and styles.