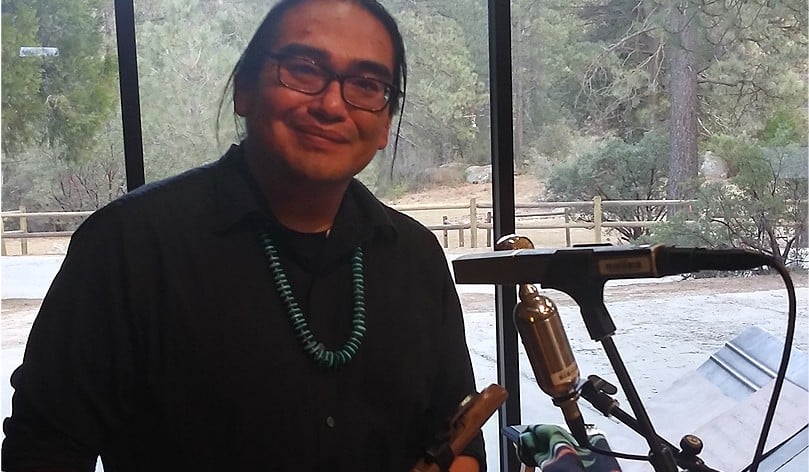 Brent Michael Davids, of the Mohican Nation Stockbridge-Munsee Band of Native Americans, is well known as a composer for the National Symphony Orchestra, the Joffrey Ballet, and the Kronos Quartet.

But to Michael Begay, among many young Native American composers, Davids may be appreciated less for his own achievements than for helping others grow. With a strong assist from the Native American Composers Apprenticeship Program (NACAP), founded by Davids in 2001, Michael, who is Navajo (Diné), has developed into an astonishingly capable and versatile musician, devoting only part of his love of music to composing.

But back home the next day in Tuba City, Arizona, in the Painted Desert on the western side of the Navajo Nation, Michael is likely to have played electric guitar in rehearsal with his symphonic metal band, Lozen.

“Lozen was Chiricahua Apache woman warrior who fought alongside Geronimo against the United States Army when they tried to take away the Apache lands,” Michael explains. “It’s a female-fronted band, with three women and two men in it, and we’ve been signed by an independent label.”

Cedar flute, electric guitar. . . but he has also composed a micro-opera based on the The Gambler, a figure from Navajo oral history, and he’s currently working on solo piano compositions.

As if performing, recording, and composing weren’t enough to keep him busy, Michael has been a key member of the team that has recently revived KGHR Navajo Public Radio, 91.3 FM. KGHR is bringing music, news, and sports to the Navajo, Hopi, and Tewa tribal communities in Northern Arizona and the Four Corners region.

“KGHR has a powerful transmitter—100,000 watts—but for a decade it was only active on-and-off. And now we’ll be streaming soon!”

Michael had gone into radio right after high school because Greyhills Academy High, in Tuba City, had a Native American radio station.

“The Greyhills librarian had been an orchestral percussionist. He frequented the Grand Canyon Music Festival and he knew I played electric guitar. The librarian also knew that Mr. Davids, who played a big part in the festival, wanted to put together a composition program for young Native Americans. That was my connection to NACAP.”

NACAP was good to Michael.

“It exposed me to a lot of experienced Native American composers—like my mentor, Raven Chacon—who were composing in many different genres.”

By 2008, after six years of apprenticing, Michael started accepting professional composition and teaching assignments. One teaching assignment takes him periodically from Arizona to South Dakota to instruct young Lakota musicians for the South Dakota Symphony Orchestra’s Lakota Music Project. It was the Lakota Music Project that brought him to Idyllwild for the Sustainability Symposium.

Despite his success, Michael concedes that “I’m still getting my footing and figuring out who I am as an artist. I’ll even admit that I’m still getting over the fear of exposing my art to other people.”

Yet he’s not so fearful that he avoids exposure. His composing commissions and his performances with Lozen and the Lakota Music Project are giving him increasing exposure.

“I’m pretty restless as an artist. There’s a new mountain to climb with every commission.”

Michael smiles when he says that. In fact, he smiles a lot, but it always seems genuine. He gives the impression of liking to have new mountains to climb because he’s confident of reaching the top and eager for the satisfaction of getting there.