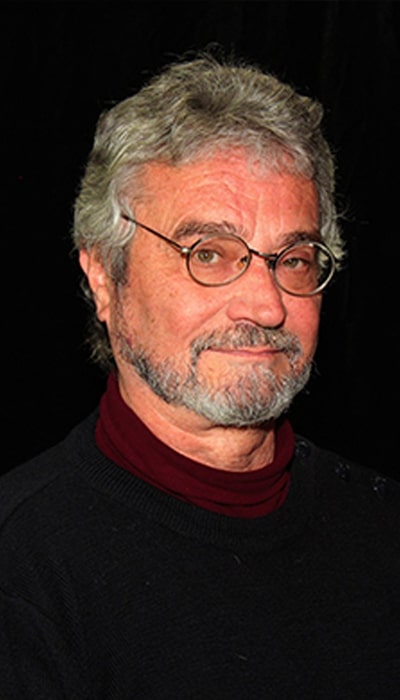 Trained at the Paris Opera Ballet School, Patrick FRANTZ entered the Paris Opera Ballet in 1959. He is named Premier Danseur in 1966. His multiple talents are quickly recognized. At 23 years old, he is not only Artiste, but Pedagogue and Choreographer. He is invited as Guest Teacher to the International Mime School of Marcel MARCEAU, he founds the Young Choreographers of the Paris Opera, and is invited to choreograph at the well-known Festival of Avignon. He simultaneously wins the First Prize of Piano at the Ecole Normale de Musique de Paris.

In 1971, he leaves France for an international career accepting positions as Principal Dancer, Professor and Resident Choreographer for Pennsylvania Ballet in the United States.

In 1973, he is named Artistic Director of New City Ballet in Columbia, Maryland for which he choreographs several original works. His choreography of Janacek’s Missa Glagolitica brought collaboration with Emilio Pucci who designed the dance floor for performances in the Cathedral in Washington D.C.

The Tucson Ballet in Arizona invites him in 1975 to become Artistic Director. He founds the Tucson Ballet School and enjoys excellent reviews all the while creating original works and inviting other Master Teachers and Choreographers to the Southwest. It is here that FRANTZ was inspired to choreograph his Firebird. Saturday Review’s dance critic Walter Terry writes: “In his Firebird the Frenchman has combined a Russian score with an American Indian theme. His technique of classical ballet, fused with the expressivity of modern dance and the cabalistic intensity of primitive ritual, works like magic.”

From 1983 to 1990, many establishments of reputation call upon his experience. He is on Faculty at the Stanley Holden Dance Center of Los Angeles, Choreographer in Residence of Los Angeles Chamber Ballet, Guest Master Teacher at the Joffrey Ballet, American Ballet Theatre, Guest Teacher and Choreographer at Westside Ballet of Los Angeles.

Since 1990, the career of Mr. FRANTZ continues to develop internationally. He has created and runs to date his contemporary ballet company La Danserie, acclaimed by the press and the State of California. He is also Artistic Director of Rozann-Zimmermann Ballet Center, Guest Teacher at Joffrey Ballet, and Hubbard Street Dance Theatre of Chicago, at the very selective Theatre Colon of Buenos Aires, at the University of Utah, the Crystal Cathedral, and the Danshaus in Copenhagen, Denmark, Ecole de Ballet Contemporain de Montreal. He also takes part as a Guest Teacher in many international Intensive Workshops.