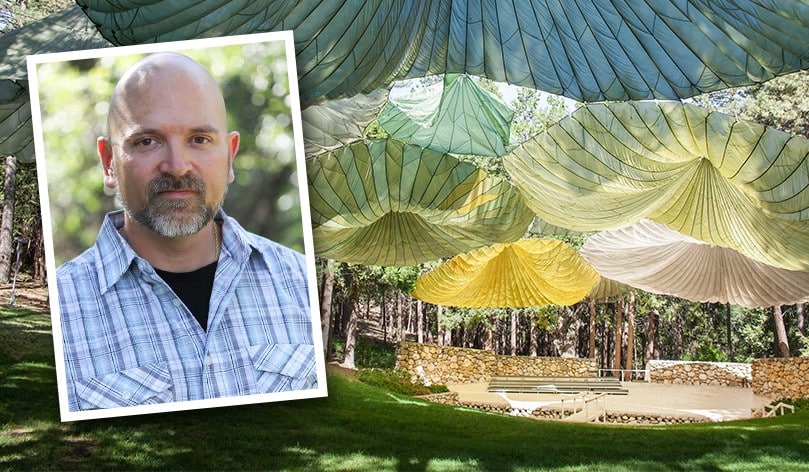 “I like saying to a student that you’re in trouble, or that you have to face certain consequences for what you’ve done.”

Allen Riedel, Idyllwild Arts Academy’s new Dean of Students, smiles. He can see that his interviewer is skeptical. Allen had recently completed two years as Headmaster of Pegasus California School, in China. He’d worked long, exhausting hours as he wore every administrative hat. In order to return to Southern California because he missed his twin teenage daughters, Sierra and Makaila, he could have taken a different kind of administrative job. Then why Dean of Students, which involves dealing with one instance of misbehavior after another? Why take the one school job that would require him to play the bad guy from September to May?

“I like telling a student you’re in trouble,” he explains, “because I would have benefited from an adult talking to me like that during my own high school years.”

He removes his Yankees cap and rubs his head. He spent some of his childhood in Kansas, when the Kansas City Royals were fierce rivals of the New York Yankees. Because his brother was a Royals fan, Allen rooted for the Yankees—perhaps hinting at the oppositional tendencies that would surface when he was a teenager.

“The administrators at my own school left me alone. Finding my way without much guidance from adults was tough.”

But he managed. He earned a B.A. in English from the University of California, Santa Barbara, then a Master’s in Education Administration from Chapman University, in Orange, California. Along the way he developed a passion for the history of the English language—”I actually enjoyed Beowulf!”—and thought seriously about a Ph.D.

Instead, Allen made the discovery that keeps a lot of people from entering doctoral programs: he liked working with teenagers and he liked helping them grow up.

“My twelve years of teaching English in the Val Verde Unified School District were great.”

Most of the district is a little more than an hour from Idyllwild.

“But I thought I also had something to offer beyond teaching, in administration,” he adds.

The Headmaster job in Qingdao, a city of nine million people near the Yellow Sea, was his opportunity.

“I learned a lot and I absolutely loved China. The people were extremely helpful to someone who didn’t speak Chinese. But, yeah, I definitely needed to be closer to my daughters.”

And closer to Idyllwild.

“It’s where I’d wanted to be since my family moved to Southern California when I was a teenager. The natural beauty, the hiking. . .”

He stops and shrugs. Idyllwild’s assets are no secret to anyone who knows the town or works for Idyllwild Arts.