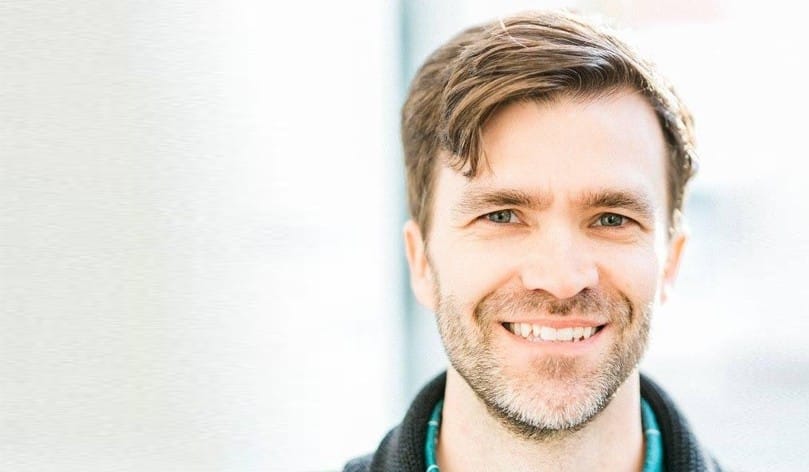 For many in the audience for the Idyllwild Arts Academy Faculty Showcase on Friday, Sept. 13, the highlight performance came from someone who isn’t an Academy art teacher, or a teacher at all.

Instead, the highlight was new Director of College Counseling Jonathan Wickremasinghe-Kuhn’s hilarious account of getting his finger stuck in one of the holes in Target shopping basket.

Jonathan’s fingers look entirely normal, so beware lest this happen to you!

“In trying to get my finger out, I got a second finger stuck in another hole.”

He waited for the laughter to fade just enough so that his next perfectly-timed addition to the story would be heard.

“I was like a little Double Dutch boy, with two fingers in the dike.”

The humiliation of having the woman checker massage a lubricating lotion into his fingers—”That was awkward”—didn’t kill him, and neither did fainting on Target’s hard floor.

“Apparently I didn’t hit my head because the basket helped break my fall.”

Jonathan’s survival is a gain not only for people who get to hear his story, but to Idyllwild Arts students who will benefit from the new Director of College Counseling’s intimate knowledge of what colleges look for in an applicant. He comes to the Academy after serving as Senior Assistant Director of the College Admissions office at the University of Southern California’s largest and oldest school, Dornsife College of Letters, Arts and Sciences.

He also comes to Idyllwild Arts as part of a valuable package, since his wife, Nimalee Wickremasinghe-Kuhn, is Idyllwild Arts Academy’s new Lead School Counselor.

“Nimalee is Sri Lankan-American and she accounts for the ‘Wickremasinghe’ half of my name,” Jonathan says, deadpanning “But I guess it’s much better than half since she added fourteen letters—and a hyphen—to my pitiful four.”

Working with Students with Arts Backgrounds

Jonathan is from Selma, in south central Alabama, starting point for the three great fifty-mile Civil Rights marches to the state capital of Montgomery, in March 1965. Selma is small, so, as a teenager, he would drive to Montgomery on weekends to watch movies.

“Some of my favorites were The Green Mile, The Shawshank Redemption, Fight Club, The Sixth Sense—and of course the Matrix series.”

“And I knew that George Lucas had gone to USC.”

It was a good choice. At USC he earned a B.F.A. in Writing for the Screen and Television and then an M.A. in Professional Writing. Next, he worked as a program coordinator for the university’s Thematic Options Honors Program before moving into their College Admissions office.

“But the cost of living in LA!” he says.

He and Nimalee have gone from a one-bedroom apartment in Culver City to a Pine Cove four-bedroom house with breathtaking views.

“Not to mention the benefit of all the great things about Idyllwild Arts, including the chance to talk to students a lot earlier about some important aspects of the college admissions process, and the fact that I’ll always be working with students who have arts backgrounds, like I do.”

Jonathan will also be safe at Idyllwild Arts: the Student Services and Maintenance departments have promised to work together to plug the holes in all of the shopping baskets on campus.