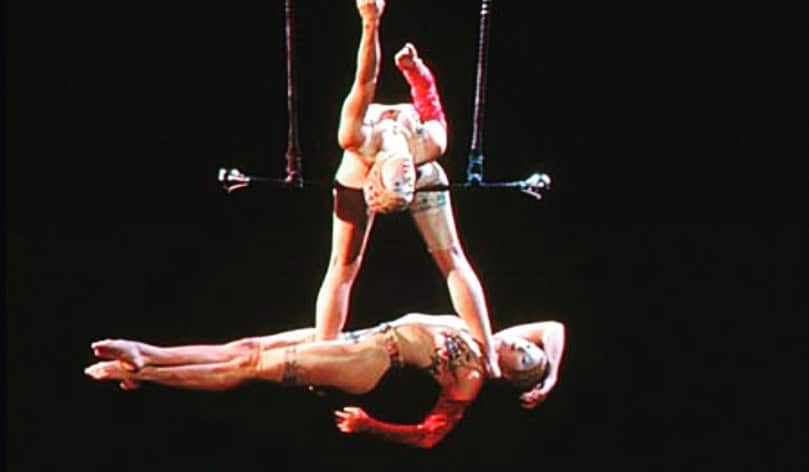 Pictured above: Twenty years ago at the Bellagio in Las Vegas; Sarah is the catcher.

Sarah Steben is the mirror twin of her sister, Karyne. Their features appear asymmetrically—that is, on opposite sides. When mirror twins like Sarah and Karyne face each other, it’s as if they’re looking in a mirror. Karyne is right-handed, therefore Sarah is a southpaw. Throughout many years of performing together as trapeze artists, they would mirror one another in the air.

They’re close, but not inseparable. This is good news for Idyllwild Arts Academy. Because Karyne lives in Los Angeles, so if she were inseparable from her twin, Sarah would have been unable to join the Academy as a French teacher, as she did in September. That would have been a big loss, since Head of School Marianne Kent-Stoll regards Sarah Steben as a natural teacher.

Sarah is a natural fit for the Academy in part because she was indeed a trapeze artist.

“I teach a lot of French vocabulary and build a lot of French conversation around being a performer,” she explains.
Her performing began when she was a teenager, in Quebec. She was a gymnast whose attention deficit hyperactivity disorder (ADHD) and mild Tourette syndrome caused difficulties in school.
“Then Cirque du Soleil passed through town. It was so beautiful that I cried and told my parents that I wanted to go with them. And of course, my twin sister would have to go, too!”
They impressed the scouts who auditioned them, but Cirque du Soleil is the circus industry’s standard-bearer.
“We trained for an entire year before we were allowed to go on tour. At the same time we were learning English, the only language that our coach used with us.”

The Steben Twins website suggests what Sarah and Karyne were able to achieve.
“We were the first women trapeze artists to catch one another in mid-air by our feet,” Sarah recalls. “But even though we performed dangerous stunts, we were conscious of the need for as much safety as possible. And our mother also understood the need for safety. She insisted on the use of mats and what is called in French a longe, which is a kind of tether or cable. This became widely used by trapeze artists, so our mother can be credited with saving a number of them from serious injury or even death.”

Another member of the family’s older generation can be credited with bringing Sarah to Idyllwild: her mother-in-law, Maggie Di Zinno, a former Idyllwild Arts Health Center nurse.

Sarah moved here to take care of her.

The most celebrated modern practitioner of the Stebens’ art was Karl Wallenda (b. 1905). He insisted on performing, often without any kind of safety device, until the age of seventy-three, when he died in Puerto Rico after falling from a height of well over a hundred feet.
Karyne and Sarah performed for three decades. However, other interests—and ultimately, in Sarah’s case, a sensible fear of heights—appear to have saved them from the possibility of meeting Karl Wallenda’s fate. In Los Angeles, Karyne is a mother, a personal trainer, and a Pilates teacher.
Sarah has a fourteen-year-old son and a desire to volunteer. It was while volunteering at a food giveaway in the town of Idyllwild that she met another volunteer, the Academy’s Theatre Chair, Bonnie Carpenter. Bonnie asked if Sarah might want to apply for a job to teach French.
“I’m so happy that Bonnie put the question to me. Eventually, our students must jump from this school platform into the world. It’s like when I jumped from the trapeze. I wish to be a longe for them throughout their careers and see them become the best, most self-confident artists they can be!”