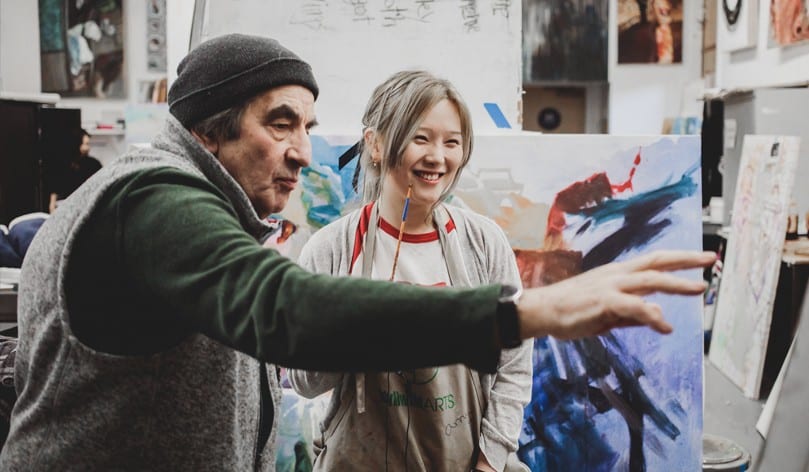 The commitment to spiritual growth that affects the Academy’s students so deeply will be shared with the wider community in Ataloa Studio on the Idyllwild Arts campus on December 8, when David leads a workshop called “Full Circle” – A Day of Art for the Community.

In addition to his Academy duties, David teaches adults for the Idyllwild Arts Summer Program and teaches throughout the year in Idyllwild Arts auxiliary workshops. “Full Circle” is part of his heavy but invigorating load.

The native of Kent, England, studied in England with David Hockney and Francis Bacon. He earned his Master of Fine Arts degree from the Royal College of Art, in London.

But the approach of the twenty-year veteran of Idyllwild Arts to art-making has been shaped just as powerfully by his studies of Zen Buddhism in the U.S. with the late Zen Master, Hakuyū Taizan Maezumi.

“Appreciate your life” because “There is nothing extra,” Maezumi taught. David’s Zen focus on giving everything to the present moment expresses itself in teaching that art is process rather than product.

Academy Visual Arts majors are “allowed to make mistakes, as am I,” David says, echoing Maezumi’s humility about his own imperfections.

“So much of art is about the things that unfold, with implications you might not intend,” David suggests, adding that the artist should “follow the lead that comes from the work itself.”

Artistic transformation consists of more than the artist’s transformation of raw materials into polished objects to admire. Art works, as they evolve, are also shape-shifting mirrors in which artists can catch glimpses of themselves, encouraging the artists’ self-transformation. The artist is a lifelong learner.

David’s insistence on reminding his students that, as an artist, he remains a student himself has earned their devotion, and earlier this month attracted large crowds to five workshops he led in East Asia.

He’d never been before, and he recalls not only the passion for art, but “a lot of good food.”

Participants in the “Full Circle” workshop will be well fed spiritually on December 8. But for David’s Idyllwild Arts Academy students, the feast begins in August and doesn’t end until May.