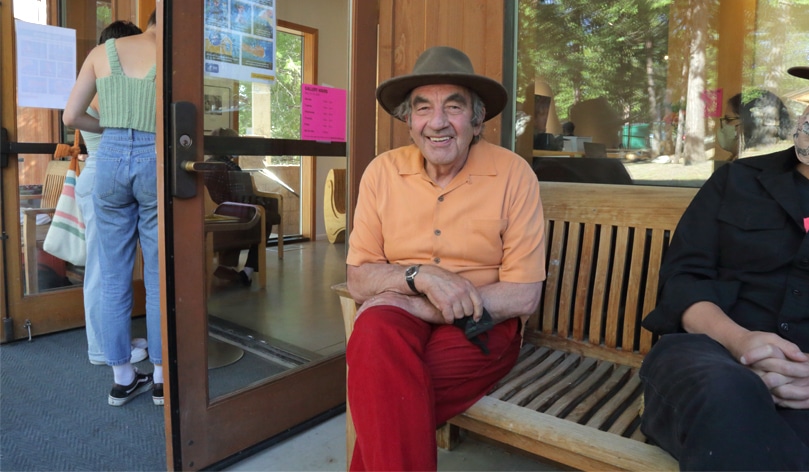 “But that means you can give as much time to two classes as you used to give to four or five,” he smiles. “Besides which I have my own artwork.”

Special projects come up, too, such as his class for Huaer Collegiate, in Shanghai. Originally, he was to have taught only three Zoom sessions, on March 5, 12, and 19. However, the class was a success, so the school asked him to continue.

David had been invited to teach the masterclass so that Huaer Collegiate students could see why successful Academy Visual Arts alums like Leyla Stevens remember him with reverence. There were challenges in the beginning. These included having to teach through a translator, while discovering that many students had brought no interest in art to the class.

“Working with the translator, Michella, took some getting used to. But once we’d worked out the kinks, she was absolutely wonderful.”

“As for the students who had no interest in art—or who thought they didn’t—it’s for students like those that you learn to make adjustments when you teach. I had carefully mapped out a sequence of lessons, which included spending a lot of time teaching drawing techniques: different ways of making lines, or creating tone by stippling, hatching, or cross-hatching. . .”

David pauses to stare into the Zoom screen. He discerns on the face of his interviewer the same confusion that he had seen in his Shanghai pupils. He adjusts, as he had done for them.

“But I realized they were less interested in technique than in expression. And I thought of my own endless drilling in technique when I was getting my B.A. at Maidstone College of Art, southeast of London. We had one model to draw—a woman—for three years. She had three poses and we drew her for two or three hours almost every day. For three years!”

His smile breaks into laughter.

“It’s funny now, but it wasn’t at the time. This was the early Sixties, and David Hockney, whose reputation was growing by then, was teaching at Maidstone. I couldn’t wait to graduate and go somewhere else for my M.F.A. so that I could enjoy a little of the artistic freedom that Hockney already had.”

Sensing the same desire in his Shanghai pupils, David undertook an abstract self-portrait for the March 19 lesson that he thought would be the last one.

“When people think they have no interest in art, it’s often because they don’t know how to have fun with it. But having fun—enjoying humor, being silly—is central to my teaching. You relax, and you can access your innate creativity.”

Humor came, in part, from incorporating his broken reading glasses into the self-portrait.

“I’m constantly sitting on my reading glasses,” he admits, laughing again. “Telling little stories like that about yourself humanizes you and helps you connect to the students. It makes them more willing to put bits of their own individuality into the art. And by putting their individuality in, they’re able to connect to the art more deeply.”

Forming the basis for his self-portrait were his initials, DRM. He scattered the letters across the canvas in varying sizes and at odd angles to one another.

“I added my fingerprint and my handprint. Nothing’s more fun than making a handprint: it’s one of the first ways that small children make art.”

Huaer Collegiate’s students are not small children. But David was pleased to help them recover, in their own self-portraits, some of the joy that making art gives us when we’re very young.

He was also pleased to see that his lessons in technique were reflected in the self-portraits—possibly against the students’ wills!

As David recalls the masterclass, he notes other joys of the moment.

“I’m fully vaccinated, so now my wife and I can eat sushi and our other favorites in restaurants. We’re still being safe, but it’s lovely to see that the requirements to be safe are gradually relaxing. This has coincided with the arrival of better weather, which makes the outdoors so much more inviting.”

He mentions an art installation that he had started working on at a private home just outside of Idyllwild.

“It’s at the home of the parents of a Visual Arts student who graduated a year or two ago, and on a beautiful piece of property. It feels magnificent to be outside moving rocks about.”

He gives a brief description of the project. It sounds as if the rocks might not be ones that a teacher would ask children to move. Yet David’s enthusiasm for the work suggests that he continues to take a child’s pleasure in art.