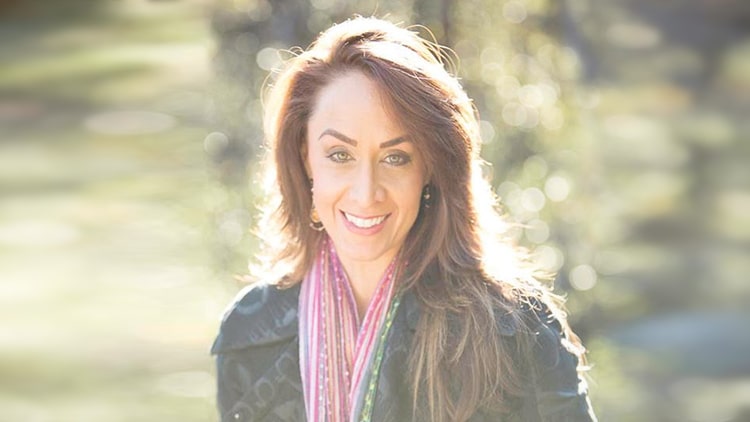 The distance between Tehran and the Big Island of Hawaii is more than eight thousand miles. That’s reasonably close to half the distance around the planet. At least, it’s close enough to half the distance to have satisfied Kasaan Hammon’s father back in 1979.
The father of the Idyllwild Arts Academy Songwriting teacher, recently honored as a finalist in the International Songwriting Competition for “Alarm,” is Iranian. The dangers of the Islamic Revolution forced him to make the hard decision to move as far away from his native country as Earth would permit for the sake of his family. So he moved with his pregnant American wife and two young children to Waimea, close to the Big Island’s northern tip.
Kasaan was six and already in love with singing, dancing, and acting. The Islamic Revolution might not have been receptive to her passions. But by the time she was fourteen, Waimea didn’t seem friendly enough, either.
“There were no lessons in Waimea,” she recalls. “I wanted a school like the one in Fame, so I found Idyllwild Arts. I was so worried that my parents would say no that I created an entire presentation to persuade them. It worked, and I started as a sophomore Musical Theatre major in 1988. That was only the third year that there was a high school and not just the Summer Program.”

A production of Little Shop of Horrors, in which Kasaan played a Doo-Wop Girl, led to the creation of a girl group called Perfect Fifth.

“We went on a California tour as far north as Berkeley. Marshall Hawkins went with us to play bass, and my big solo was the old hit by The Dixie Cups, ‘Going to the Chapel.'”
The range of her performing talent was such that she graduated from the Academy as a Dance major in 1990. Yet by the mid-Nineties, having studied at both Northwestern University and the California Institute of the Arts, she was living in Los Angeles, using RIGSI as her artist name and focusing on writing and recording the songs for her debut album, Gift of All.
“Then, in 1997, I was signed by a major label, Elektra. A number of my songs got radio and club play, and there was supposed to be an album. But because of changes at the record label, a full album was never released.”

Kasaan put her frustration with Elektra behind her to move to New York for success as a “topline” songwriter.
“Songwriting involves three main components,” she explains. “There’s the music, or accompaniment, meaning chords, beats, and instrumentation. There’s the melody, meaning the notes you sing, and the lyrics, or words. Most songwriters do a combination of these things, and some specialize in one or two.”
She looks hard at the Zoom screen. She realizes that her interviewer knows little about music. But he nods to indicate that he understands.
“Topline writers specialize in writing melody and lyrics. For example, a dance music producer might have an exciting dance track with beats and lush instrumentation, but a good topline writer is needed to create the vocal melody and lyrics. If you start singing a song that you love out loud right now, you’re singing the topline.”

While writing topline, she continued to compose her own songs. But, realizing that she didn’t have a passion for being on stage and that she derived more satisfaction from composing and other kinds of behind-the-scenes work, she also went into management. She worked with talent in both New York and Philadelphia.
After returning to Los Angeles in 2005, she worked in Chaka Khan’s management team, and from 2008 to 2010 she managed Songwriters Hall of Fame member Albert Hammond.
It was through managing young artists and helping them build their careers that Kasaan began to think about teaching. Back in Southern California, her twenty-year reunion at Idyllwild Arts, in 2010, led to a masterclass for the fledgling Songwriting program, then to a series of masterclasses. She has taught regularly in the Songwriting program since 2013.
Meanwhile, the versatility that saw her move from Musical Theatre to Dance during her student days remains a defining characteristic. She expects to complete her M.A. in Teaching Writing at Johns Hopkins next year, and Academy Head of School Marianne Kent-Stoll has found Kasaan to be invaluable as a substitute teacher for English and English as a Second Language classes.
But she knows the difference between showing versatility and spreading herself too thin. As “Alarm” and past award-winning songs like “Flesh & Bone” and “Magnet” suggest, as long as Kasaan remains a presence in the Songwriting program, the benefit to the Academy’s Songwriting majors, in a program she has helped bring to maturity, will be huge.