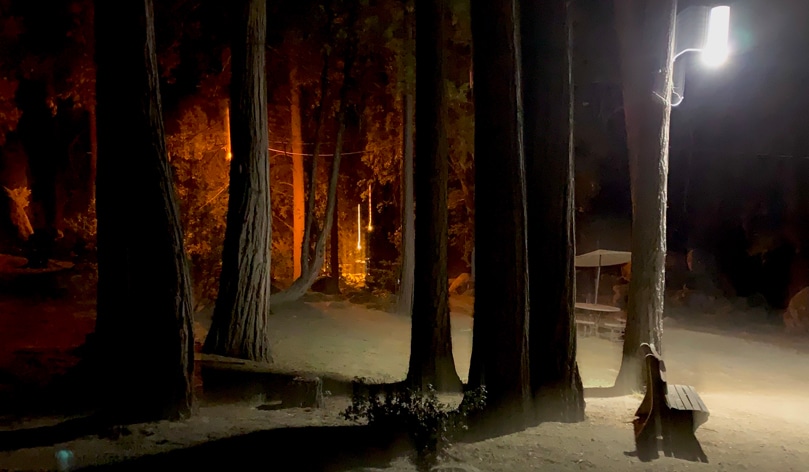 The poet Brendan Constantine, longtime instructor in the Idyllwild Arts Summer Program, has written the following enthusiastic account of the workshop he taught this year, Creative Writing Intensive: The Living Word:

For years I’ve wanted to lead a Creative Writing class at Idyllwild Arts in the middle of the night. Ideally, I’d like to have the students wake at a set time, perhaps 12:30, then gather at our open-air classroom.

There, with the participation of Summer Program Counselors (and interested parents!), we would listen to the sounds of the forest and do some new writing. What inspiration could be had under the pines, when the sounds of the town have receded, and the stars have no competition? Would we be more open to our imaginations? More playful? More psychic? My hope would be to have plenty of bug spray, flashlights, and hot chocolate to make everyone comfortable while we find out.

After we had written for a while, and perhaps shared our first impressions, I’d send everyone back to their dorms with the understanding that class would resume at a later time. 10 am? 11 am? That way, the kids could sleep in and be fresh for our recap of the experiment.

Well, I can’t remember a time when things went so closely to plan. The above scenario was realized perfectly. I arrived at my study pad at midnight and set out lanterns and composition books, and even put on a little music: The Flamingos with “I Only Have Eyes for You.” Very haunting, indeed. About an hour later, I saw the eerie traces of flashlights approaching! We gathered under the stars and got a sense of our surroundings.

After a brief discussion of the Milky Way (so vivid on Idyllwild nights) and a few notes on the variety of wildlife, big and small, which was likely watching us, we began to write. Meanwhile, the Summer Program Counselors prepared cocoa and a variety of cookies. For the next thirty minutes, the kids summoned all kinds of wondrous language and crafted poems and stories.

Here’s an excerpt from a student named Nayomi:

“The house on Mallard Way is old, and when I say old, I mean older than the rest of the houses on the block. White paint chips off the aged planks as the front yard grows more untamed by the day. There are thick flowery weeds growing in the cracks of the painted curb, and a forlorn hexagon window that seems to give the impression of loneliness. . . or something other. . .

“Some people say I’m the weird house on the block. . . Plain they call me, and it’s no wonder I live with my grandmother on Mallard Way. . .”

For the last part of our session, students shared their work and their observations of the experience. All agreed it was a total success and should be offered next year! It’s also worth noting that the next morning, the kids did in fact sleep in, and then held our most productive day of our two weeks.

Wahoooo! I’m so proud of this group! This was a truly great summer.

I should note that Eric Bulrice, Director of Program Operations for the Summer Program, was absolutely instrumental in the success of this effort, from beginning to end. We could not have done this without him!