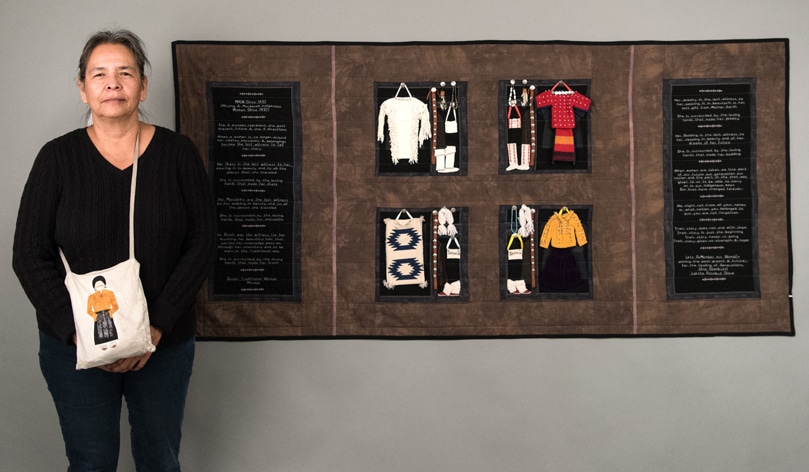 The Diné (Navajo) artist Susan Hudson is a grandmother of eight. Yet she hadn’t even heard of the Indian markets until a decade ago.

“Believe it or not,” she says, “it was Ben Nighthorse Campbell, the former U.S. Senator from Colorado, who made jewelry, who told me about the markets. The Indian world is small.”

But Susan’s debut as an exhibiting quilt-maker–she won the top prize at her very first festival–was a sign of things to come. She has recently won the third annual Idyllwild Arts Imagination Award at this year’s Heard Museum Guild Fair & Market.

Museum curators, scholars, and practicing artists judge the competition, rewarding work that succeeds in “addressing issues of importance to Indigenous communities.” Starting seven and a half minutes into this video, Susan explains that her MMIW: The Tree of Many Dresses dramatizes the epidemic of missing and murdered Indigenous women and girls.

The quilts pictured here illustrate the same theme, including the one that shows the little shepherd girl, Robbed of Their Innocence.

Given her profound sensitivity to Native American history, Susan’s work inevitably addresses important issues like this one.

“I started showing my quilts late,” she says, “but I’d had the skills for a long time. I started sewing–making new clothes and mending old clothes–when I was nine because I was poor.”

That was during her childhood in East Los Angeles.

“In the Indian boarding schools my mother and grandmother were forced to sew. Of course they were severely punished when they didn’t sew exactly the way the white teachers told them to.”

Painfully aware that it was only in 1978, with passage of the Indian Child Welfare Act, that Native American parents became legally entitled to deny their children’s placement in off-reservation schools, Susan adds that “I’m only one generation removed from my mother’s traumatic experience of those schools, so I sew in honor of her and my grandmother.”

If she owes an artistic debt to her mother and grandmother, she also owes a debt to Ben Nighthorse Campbell, and not only for introducing her to the Indian markets.

“Ben wasn’t impressed by my early work,” she laughs. “He said my stuff was kind of boring and that I needed to break out of the box!”

So her quilts began telling stories, often inspired by her dreams. Yet it’s clear that dreams, which tend to be fragmentary, only form the beginnings of her work. Her conscious artistry is so rigorous that she will take a year and a half to finish a quilt. 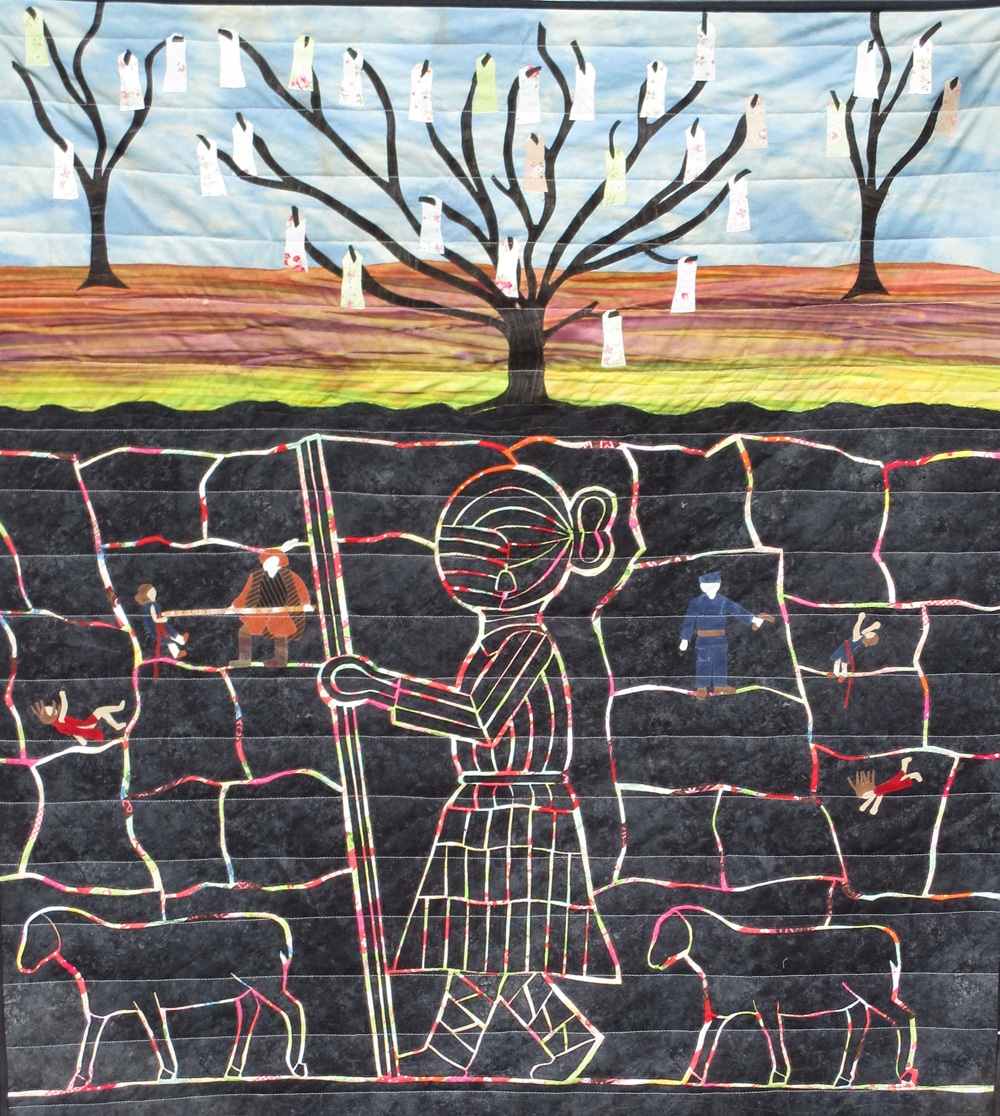 If Susan is too easily categorized as a Native American artist, it is important to see that her representations of Native American experience invoke universal themes that can move people from every background. This is why her work can be found as far away from her home in Sheep Springs, New Mexico, as Germany, Switzerland, Hong Kong, and New Zealand. As the Jewish buyer of her quilt depicting the Long Walk of the Navajo observed, “Change the uniforms on the soldiers and those people being driven from their homes could be us.”

Nevertheless, making the rounds of the Indian markets is a good way to display her universally significant work. This month she exhibits at the International Quilt Museum, in Lincoln, Nebraska, where her appearance is eagerly anticipated. That wasn’t the case back in 2015 at the Eiteljorg Museum of American Indians and Western Art, in Indianapolis. She recalls that she was a relatively new artist at the time, so she had modest expectations. Then she won her first Best of Show at Eiteljorg’s Indian Market & Festival.

“People were coming after me with cameras and I kept trying to get away. I can move pretty fast when I want to!”

Susan has reflected on her late emergence as an artist.

“Everybody is good at something,” she says. “Each one of us is born with a seed that you have to nourish. But the seed can break into blossom at different ages.”

This spring, residents of the eastern United States witnessed the spectacular emergence of billions of cicadas after an absence of seventeen years. In 2038, after another seventeen years, they’ll be back again.

Admirers of Susan Hudson’s work will be pleased to learn that she has no plans to go into hiding during the next seventeen years. Her art is likely to remain in bloom throughout all of that time.